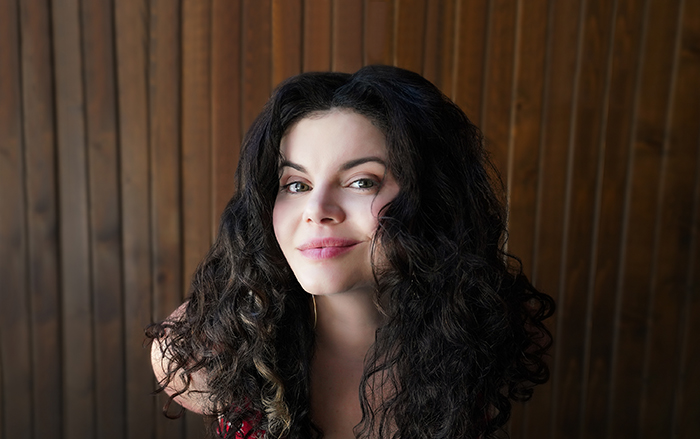 “Your voice should be available free on the National Health!” BBC Devon
“Rebecca Loebe has an almost supernatural ability to get the crowd singing along.”  KUTX Austin
AUSTIN-BASED TROUBADOUR Rebecca Loebe is many things: an award-winning songwriter, a celebrated vocalist, an enthusiastic gardener, a world-traveling performer, and, occasionally, a liar.
It started during lockdown when after a decade as a full-time touring songwriter, she saw over 150 concerts canceled in the blink of an eye. “My entire profession disappeared overnight,” she says. So she had to get creative.
Falling back on her university degree in audio engineering, and camera experience she picked up as a contestant on the first season of NBC’s “The Voice,” Loebe outfitted her home office into a broadcast studio and began performing online concerts to her fans around the world.
To keep things interesting, she started lying; in every concert, she performed original songs and told stories about her life and adventures on the road. At the end of the concert, audiences had to guess which story was a lie for a chance to win bragging rights and a prize from her virtual merchandise table.
The show was a hit with her online fanbase, and in 2022 she’ll be bringing it to stages across the UK, The UK, and Europe. Don’t miss TRUE SONGS AND A LIE, starring Rebecca Loebe!

Support from JACK HARRIS: Jack Harris‘ songs take a compassionate look at things both common and uncommon, and see them differently. They are literate, curious, often in character, and always intriguing. His latest album, ‘The Wide Afternoon’, produced by UK folk giant Gerry Diver (Sam Lee, Lisa Knapp, Tom Robinson), was released in November 2016 to universal press acclaim.
Jack was a SXSW showcasing artist at 17, and the youngest ever winner of the Kerrville Folk Festival’s New Folk Award in 2005 (previous winners include Gillian Welch, Devon Sproule and Anais Mitchell). He has been the recipient of the PRS ATOM award for new music creation, as well as an EFDSS creative bursary for songwriting.
‘Jack Harris is a priest of song who holds himself to a rigorous, ancient code of beauty most of us have forgotten exists.’ Anais Mitchell