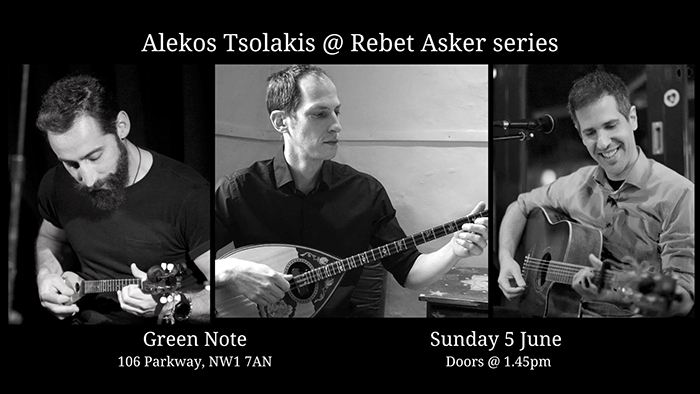 Rebet Asker was a restaurant/music venue which saw all the great Greek musicians and from the 20th century through to today pass through it. The walls of this little place in a small side street by Piraeus harbour have witnessed the history of the Greek Rebetiko as it has evolved over the last one hundred years. Some years have passed now, since it closed, but through this series of Sunday gigs we will do our best to recreate some of the magic of these musicians and their songs as it started and developed. Now in its 10th year, this tribute to the magical music of rebetiko, is the longest running series in London dedicated to this music. Come to hear classic songs and even some lesser known gems of great rebetiko musicians such as Toundas, Papazogklou, Skarvelis, Peristeris, Hadjichristos, Vamvakaris, Papaioannou, Tsitsanis, Mitsakis, Hiotis and more!

FREE up to and including 6 years old. An afternoon of Greek Music for all the family!

NB. Seating operates on a first come first serve basis. Please be prepared to stand (or lean against the bar!) if all seats are taken by the time you arrive.

Alekos Tsolakis is a 3-string bouzouki player and representative of the rebetiko and urban folk music of Greece. Based in Thessaloniki, he lives and breathes music and is unique and famous for his passion, spontaneity, creativity and imagination. Alekos is currently considered one of the key rebetiko musicians.

In this session of the series, George Tsolakis and George Angelopoulos are joining Alekos in a music journey to the post-war rebetiko sounds and repertoire. They will be performing favourite pieces composed by Tsitsanis, Mitsakis, Hatzihristos and Hiotis among others.

Please do bring your instruments, friends, families…especially children. There is room for everyone!