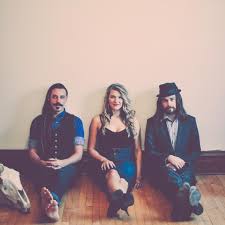 Road-warrior festival veterans RED MOON ROAD make a much bigger sound than one would expect from a trio. In an impressive, well-choreographed show they manage to incorporate impeccable three-part harmonies, a roots drum kit split entertainingly and pragmatically between two band members, and an acoustic guitar cleverly rigged to also be a bass. A moustached man plays mandolin, lap steel, banjo and organ (often at the same time), and subtle technological wizardry whirls as the unmistakable soulful voice of one of Canada’s most talented singers soars above it all. Their unique show is equal parts polished songwriting, undeniable musicianship, compelling storytelling and engaging showmanship.

With hundreds of gigs behind him – and a coveted Danny Kyle Award from Celtic Connections 2013 – Elliott Morris has a formidable reputation as one of the hardest-working and most sought-after young artists on the acoustic scene.

The singer-songwriter, featured in Acoustic magazine as ‘The Next Big Thing’, taps the strings and beats the guitar’s body to create an intricate spectacle, together with an original and unique sound integral to his songs.

Half English, half Scottish and raised in Wales and Lincolnshire, Elliott has always been one to enjoy travelling, and this is evident in his almost constant touring schedule. He’s played all across the British Isles, from Orkney to Plymouth, Boston to Llangrannog, Belfast to Clonakilty.

Elliott’s original compositions marry intricate guitar lines with heartfelt, honest vocals and clever wordplay, combining elements of folk, roots, jazz and country. Embracing the traditional and the contemporary – this is folk music for the 21st century.

“As the guy who has had the honour, for many years now, to present Cambridge Folk Festival’s Saturday afternoon Stage 2 Session, I regularly get to see the cream of the international folk scene. In 2014, Elliott Morris walked on and quite simply, stole the show. Go and see him, now.” Brian McNeill (The Battlefield Band)

“One of the most impressive guitarists to grace our studio for a very long time…a compelling listen – and mesmerizing to watch!” Dean Jackson – The Beat / BBC Introducing