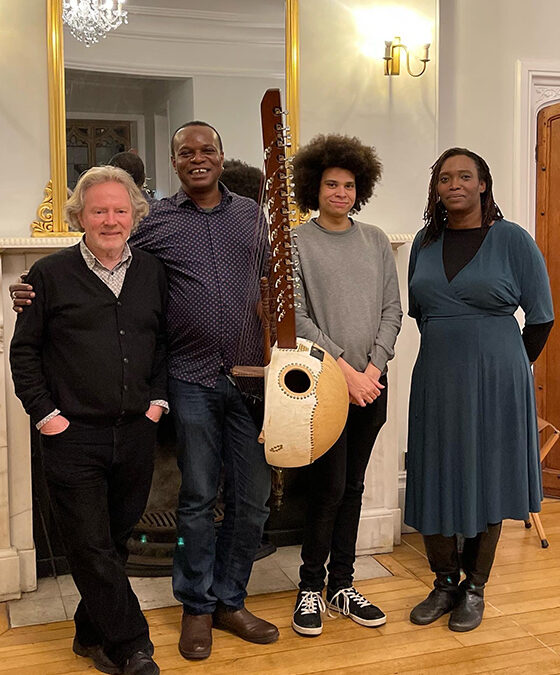 THIS SHOW WILL BE TAKING PLACE AT OUR HOME AWAY FROM HOME FOR THE NIGHT, THE SLAUGHTERED LAMB.

REG MEUROSS: STOLEN FROM GOD: With extensive evidence of the slave trade across the South-West of England, and a real need for the stories to be uncovered, Reg Meuross has written a powerful set of songs  ‘Stolen From God’, with narration to tell the challenging and often harrowing tales of England’s past.

Reg is collaborating with the great Master Kora player and Griot Jali Fily Cissokho, concertina player Cohen Braithwaite-Kilcoyne and vocalist Jaz Gayle. The quartet will record an album (release date 7th October) and the shows will be accompanied by a succinct history around each song.

Recognised as a “true troubadour with a social conscience” by Mark Radcliffe, Reg Meuross has made it his life’s work to bring the stories of the oppressed, forgotten and misrepresented members of our human family to light.
Reg has never shied away from confronting uncomfortable truths, questioning the decisions of the powerful, and addressing false histories in his songs: whether it’s calling out the repugnant effects of austerity in Faraway People, or hard-hitting social commentary with The Lonesome Death of Michael Brown, his belief that “folk songs provide a rapid and accessible route into history and its relevance to current affairs and our lives” stands him in good stead when it comes to unearthing and tackling the subject matter of Stolen from God.

“While nothing can be done to atone for the atrocities carried out during that period in British history, it’s obvious to me that there is a need for greater awareness of the West Country’s involvement in the Slave Trade to be increased on all levels. As the scale of the South West’s economic reliance and influence in the slave trade began to reveal itself, with this knowledge came a sense of betrayal; that after 200 years so much of this important part of our history is only now being owned and examined. My task with Stolen From God was to produce a song cycle of original songs telling the stories I’ve found, and to present a history of The South West’s involvement in The Slave Trade in a way that will be easily accessible and will have impact.” Reg Meuross