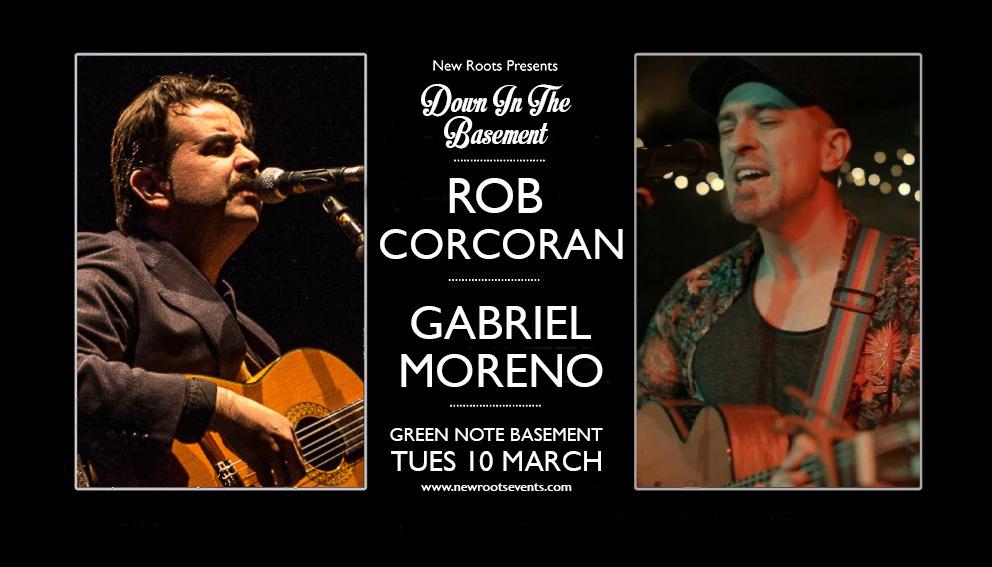 New Roots presents… perfect contemporary singer-songwriter double-bills in miniature in the 25 capacity Green Note basement.
Dublin troubadour ROB CORCORAN is a much respected figure on the London roots scene, with folk legend Christy Moore including his version of Corcoran’s brilliant ‘Ringing That Bell’ as a key song in his current touring set and recently released live album. Corcoran’s lyrically compelling, beautifully observed songs are drenched in Celtic soul, drawing from the same deep wells that serve Van Morrison and Mike Scott so well. Present too is a strong thread of influence from the heart-on-sleeve poetry of John Prine, Hank Williams and Leonard Cohen. He recently supported legendary Irish roots artist Mary Coughlan in the UK, and continues to hone his craft both solo and with full band around the best folk venues of Britain and Ireland.
“This man can surely sing, and he has a great band behind him. He says some things that need to be said” Christy Moore
“I implore you check him out, don’t let me down… this guy is special.” Americana UK 9/10

GABRIEL MORENO is a Gibraltarian poet and singer songwriter who has been performing for the past 20 years in Gibrlatar, Peru, Italy, Spain, USA and the United Kingdom. His folk songs are both poetic and political, mining the same rich seams as Leonard Cohen, Fabrizio D’Andre and Georges Brassens. He plays solo this evening- you’ll also find him elsewhere alongside The Quivering Poets, his wonderful backing band with Basia Bartz, Pablo Campos, Pablo Yupton, Adam Beattie and Adria Faurra.