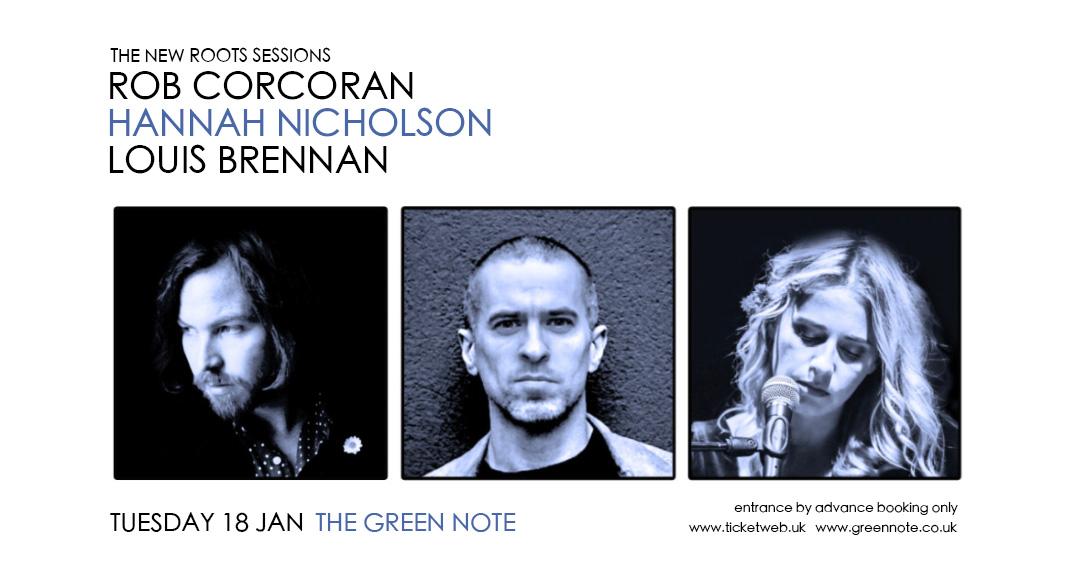 New Roots presents…
Dublin troubadour ROB CORCORAN is a much respected figure on the London roots scene, with folk legend Christy Moore including his version of Corcoran’s brilliant ‘Ringing That Bell’ as a key song in his current touring set and on his recently released live album. Corcoran’s lyrically compelling, beautifully observed songs are drenched in Celtic soul, drawing from the same deep wells that serve Van Morrison and Mike Scott so well. Present too is a strong thread of influence from the heart-on-sleeve poetry of John Prine, Hank Williams and Leonard Cohen. He recently supported legendary Irish roots artist Mary Coughlan in the UK, and continues to hone his craft both solo and with his full band around the best folk venues of Britain and Ireland.

“This man can surely sing, and he has a great band behind him. He says some things that need to be said” Christy Moore

“I implore you to check him out, don’t let me down… this guy is special.” Americana UK 9/10

London-based Dubliner LOUIS BRENNAN is a singer-songwriter in the folk tradition. His folk however aren’t the field hands and travelling minstrels of yore but the repressed middle managers and ennui-ridden urbanites of late-stage capitalism. They populate tales of bad sex, half-drunk commutes and interpersonal claustrophobia delivered in Brennans cracked baritone, at times embarrassingly intimate, at times spuriously broad, peppered with pitch-black humour.

His debut album Dead Capital was recorded at Berlin’s Candybomber Studio, located in the now-defunct Tempelhof Airport. Produced alongside acclaimed Irish songwriter A.S. Fanning and legendary engineer Into Krauss, whose credits run from noise-merchants Einsturzende Neubauten to tango pioneer Astor Piazolla, Dead Capital brings together a body of work shaped through dozens of live shows in London and further afield. It was released to critical acclaim in February 2018 with For Folks Sake remarking ‘Dead Capital is an overwhelmingly beautiful album forged from hopelessness’. He plays this evening accompanied by a full band of drums, bass, pedal steel, guitar and keys.

‘A master storyteller with a voice like rolling thunder’ – GQ Magazine