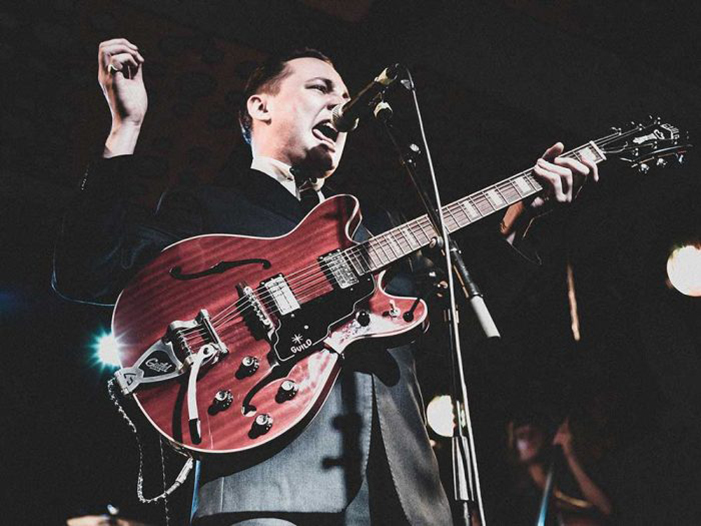 THIS EVENT IS TAKING PLACE AT OUR HOME AWAY FROM HOME, THE LEXINGTON, 96-98 Pentonville Rd, N1 9JB

Rob Heron & The Tea Pad Orchestra don’t care what genre you choose to put them in – Western Swing, Blues, Country, Rock & Roll or whatever else– as long as you understand that they’re 100% sincere and 100% immersed in this stuff. This is no lazy pastiche, no dressing up box. They live and breathe this music and want you to get immersed with them.

The Tea Pad are eight years into a remarkable story that began with four friends studying at Newcastle University and now sees them playing venues and festivals across the UK and mainland Europe. Based in Newcastle Upon Tyne but with members hailing from Orkney to Warwickshire, the Tea Pad sound draws on myriad influences – from Hank Williams to Django Reinhardt, Tom Waits to The Beatles – yet ultimately sounds like nobody else, that North Eastern Swing style that’s utterly their own and changing all the time.

Across the four wonderful albums – 2012’s “Money Isn’t Everything”, 2014’s “Talk About The Weather”, 2016’s “Something Blue” and 2019’s “Soul Of My City” – the band have constantly added new flavours to their sound: Heron in particular is a vinyl obsessive, always fired up about some new passion – calypso or boogaloo or whatever this week brings – and that eclecticism feeds into their songs, with the newest releases adding twangy 60s guitar tones and modernist R&B styles.

The band tour the way bands should – widely and endlessly – winning friends and fans at each new show with notable performances at festivals like Glastonbury, Bestival, Wilderness and Cambridge Folk Festival. They’ve appeared three times on Radio 4’s Loose Ends, and had their music played by everyone from Marc Riley to Huey Morgan.

October 2019 sees the band release “Eta Carinae”, a four track EP, with a title track reminiscent of The Beatles and features a string quartet and lyrics inspired by Brian Cox documentaries. The new EP, which sees the Tea Pad sound evolving more than it ever has previously, is released on October 11th on 10″ vinyl and digital.

Support from TRUE STRAYS: True Strays are lifelong friends, songwriters and country boys – Joseph James and James Cameron – from Bristol, England who are fast carving out a niche of their own in the UK Americana scene. Their music is a cathartic celebration of alternative roots americana and blues rock.

Their songs focus on the dirt that life throws at you and how struggle can be transformed into something better. The prolific songwriting duo draw influences from classic sounds such as Neil Young, Muddy Waters, Fleetwood Mac and modern retro inspired acts like Alabama Shakes, Gary Clark Jr and the Black Keys.

From the rock and roll circumstances of their first meeting, in a sand pit in playgroup 30 odd years ago, they have completed countless UK tours, supported bands as diverse as My Baby and Elles Bailey, been jump started by Keith Allen, played by BBC Introducing and BBC Radio 4, played their first European dates, survived 70+ festival shows at prestigious festivals like Green Man, Boom Town, Larmer Tree and Shambala and have been featured on the Spotify’s Nu-Blue and Modern Blues Rock playlists.

2021 sees a year’s hard work behind the scenes coming to fruition. A recent invite to showcase at the prestigious UK AmericanaFest, a debut album and a performance at Black Deer Festival all on the horizon. With or without live shows, True Strays are not giving up on their musical calling.