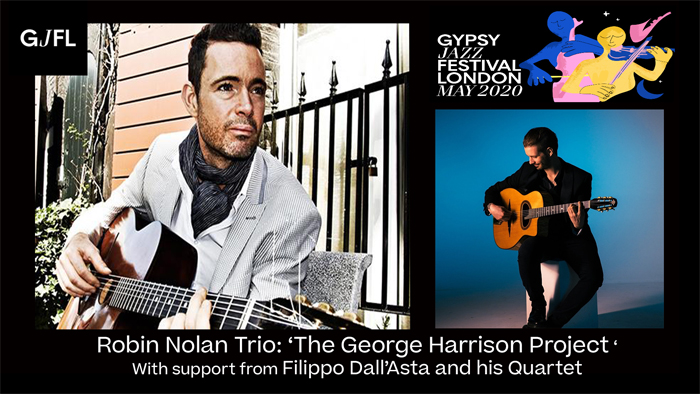 PLEASE NOTE, TICKETS MAY BE PURCHASED FOR THE SHOW ONLY (£17) OR FOR THE LIVE PODCAST WHICH INCLUDES ENTRY TO THE SHOW (£25).

With over 2 million views on Robin’s youtube channel, Gypsy Jazz Secrets, Robin Nolan is without doubt the world’s leading authority when it comes to passing on the knowledge of all things gypsy jazz. He’s built up a massive and ever growing fan base of musicians and music lovers alike.

Robin and his trio have played the Django Reinhardt festival in Samoir numerous times as headliners, he’s travelled the globe for the last 2 decades taking in shows at many of the jazz world’s top venues and festivals; North Sea Jazz, Montreax Jazz Festival, London’s Royal Albert Hall, New York’s Jazz at the Lincoln Centre to name a few.

His celebrity endorsers are a who’s who of the guitar god world, “The Beatles” George Harrison named him as his favourite guitarist!! “The Rolling Stone’s” Bill Wyman has had him in his band, Hank Marvin joined him for his recent Gypsy Jazz Secrets Australia guitar retreat.

Prepare to be amazed at Robin’s beautifully lyrical and at times breathtakingly virtuosic musicianship and to witness some of the finest, hottest guitar playing you have ever heard

SUPPORT FROM: Filippo Dall’Asta Quartet
Filippo Dall’Asta is an Italian Gypsy jazz guitarist, composer, bandleader and arranger. He is known for mixing the sounds of Gypsy jazz with traditional Indian music, to forge his own style of progressive guitar playing. He has toured and recorded with hundreds of artists such as Mozes Rosenberg, Lollo Meier, Giacomo Smith, John Wheatcroft, Gypsy Dynamite, Harp Bazaar, Tara Minton (Björk), Mehboob Nadeem, The Onironauts and many more.

Filippo released his first solo album in December 2018: “Mediterasian.” The album was praised as “one of the best instrumental albums of 2018” by LA Music Critic Awards.

Filippo will be Joined by Tobie Medland on Violin, Ducato Piotrowski on Rhythm Guitar and Nick Lenner-Webster on Double Bass.

This afternoon will feature a special Live edition, with Robin Nolan himself.

Tickets to the Gypsy Jazz Hang-outs Podcast include entry to the evening show.