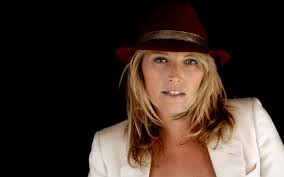 “A gifted singer-songwriter”
— The New Yorker

“She sounded like a traditional balladeer, a poetic troubadour from the 1960s Greenwich Village folk scene”
— The Aquarian Weekly, New York City

Sadie Jemmett returns to the Green Note after a sold out show at the venue in January and a sell-out tour of the South of France in the spring.

Sadie is a British singer-songwriter whose extraordinary songs reflect a remarkable life. She has been described as “Reminiscent of a female Nick Cave and echoes too of Billy Bragg” by Songwriting Magazine.

Behind the entrancing eloquence of her lyrics and the subtle acoustic beauty of her music lies a restlessly seeking spirit and a rich and colourful experience. Her peripatetic journey has followed a jagged course from a wildly bohemian childhood through being a teenage runaway, a backing singer in a reggae band and a touring actress to her role today as one of the most magical singer-songwriters on the music scene.

Sadie Jemmett’s debut album, The Blacksmith’s Girl, was released in 2011 on Wildflower Records and mixed and produced in Los Angeles by Grammy winner David Bianco (Bob Dylan, Johnny Cash), and mastered in London by Kevin Metcalfe (Queen/David Bowie/Robert Plant). London Love Songs, her second album, was released in July 2015 to great acclaim and she continues to write and perform her music as a solo artist and also for theatre.

This is Marcus Eaton’s debut tour of the UK. Recently hailed by two-time Rock & Roll Hall of Fame inductee David Crosby as “one of the best young singer-songwriters in America – maybe even the world”, Los Angeles-based Eaton is receiving international attention following the release of his latest album “Versions of The Truth”.

Through passionate, intelligent lyrics in songs reminiscent of Ed Sheeran and John Mayer coupled with a virtuoso, original guitar technique Marcus has emerged as one of the leading lights of the new generation of American singer-songwriters. Classic storytelling, songs of love and metaphysics all wrapped in an original singing voice draw the listener into an intimate experience performed by an artist described by Crosby “as like God – on a good day.”

Marcus’ has an extensive touring history and as well as performing solo in Europe and America, he has opened shows for Bob Dylan and Dave Matthews, Nils Lofgren, Dr John and Rodrigo Y Gabriela. Don’t miss this opportunity to catch Marcus Eaton before he heads off to sunnier climes on an Italian tour before returning to L.A.