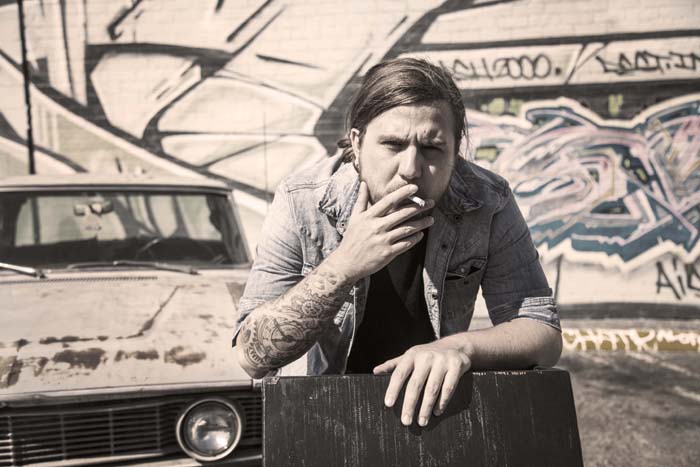 SAM MORROW: “There is a country scene in LA, and Sam Morrow is taking it over” – LA Weekly

“Littered with strong lyricism, which is established right off the bat, creative songwriting, and instrumental work that will make your head spin, There Is No Map is not only a fun listen, but it is also easy to connect with and understand. 4/5 Stars” – The Prelude Press

“’14’ recalls ‘June On The West Coast’ from Bright Eyes’ precocious debut Letting Off The Happiness and ‘December’ drinks from the same shallow well as Neil Young’s Harvest.” – Songwriting UK

On the title track of his sophomore release, There Is No Map, Sam Morrow sings “Well, I didn’t learn too much, back when I knew it all.”, a sentiment that perfectly encapsulates the soulful journey of this promising young American troubadour.

“In the past, I never really gave myself the opportunity to grow like I have since getting sober. I never really cared to learn about myself, my flaws, my strengths. I’ve been sober for long enough to where I see things coming back to me, but the fog of the chaos is only getting thicker, and that scares me.”

It’s been a busy year for newcomer Sam Morrow. Over the course of 15 months, he will have released his first two full length albums, a live in-the-studio EP with accompanying videos, be named an NPR “World Cafe Next” artist and play more than 100 shows, including an East Coast tour with blues legend John Mayall, kicking off The Bandit Town Festival and a successful SXSW.

While Ephemeral introduced the world to Morrow’s story and sound with a collection of haunting vignettes, his sophomore effort, There Is No Map, goes a couple steps further, exploring the joy ride before the hangover. Infused with an explorer’s soul and world-weary eyes, the structure and heart of this album mimic Morrow’s own growth as a person and artist. It’s an undeniable celebration of life, in all its unvarnished glory, as is evident right out of the gates where album opener, ‘Barely Holding On’, finds our thrill seeking maverick, thundering down the asphalt on a cocaine-fueled adventure.

“(Album producer) Eric Corne and I had a vision, since the end of our last record,” says Morrow, “for this one to be daring. The last album dwelled on the darkness of growing up and running from reality, so I wanted this record to highlight the real adventures I had, and still have. We also wanted this record to be more of an ensemble, with the instrumentation helping to tell more of the story. We got some of our favorite musicians together in the studio for four days total; Matt Tecu on drums, Eamon Ryland on guitar, Ted Russell Kamp playing bass and Sasha Smith on keys. We recorded the first five songs in two days at Kingsize Soundlabs, in Eagle Rock. It provided a space where we could just go in and create, not simply record. The beauty of the ensemble that we put together is the ability for Eric and I to work together with them on a very raw idea. One of the songs we did at Kingsize was ‘Wasted Time.’ The interaction between Eamon’s pedal steel playing, Sasha’s organ part, and Matt’s minimalist percussion approach wouldn’t have happened tracking separately.” Corne continues, “We topped it off with Eamon’s iconic baritone guitar solo and gorgeous background vocals by Samantha Valdez. She added that classic country element, like an Emmylou (Harris) or Patsy (Cline) would have done. “It’s easily my favorite track on the record,” exclaims Morrow.

“I felt as though I was changing as a person and so my music should follow. My tastes had matured and I found myself digging deeper in the depths of traditional Americana; Little Feat, Hank Williams, Paul McCartney’s RAM, Lucinda Williams, Merle Haggard. I found myself being influenced by things I wasn’t before. Early in my life, I turned a shoulder to country music but once I started seeking out the sounds beyond what we’re spoon fed, I found my home; the land of storytellers and outlaws picking against the grain. But I still wanted to stamp it with my own brand. I wanted to dip into psychedelia and make a record referencing all different kinds of music that I love.” On, ‘Am I Wrong,’ you hear some Ray Charles crossed with The Doors; ‘Green’ blends country and gospel; and ‘The Deaf Conductor’ serves up acerbic Dylanesque wordplay over a rollicking Crazy Horse thump and guitars reminiscent of Lowell George (Little Feat).

Whereas Ephemeral was written amidst a fog of lingering depression and addiction, Morrow’s turn with There Is No Map, is a wide-eyed journey through the past, careening into the future; Drenched in a childlike optimism and chemical-induced glee, the realities of this record are consequences of Morrow’s own juxtaposed experiences. Even its artwork taunts the imagination with a provocative impossibility of conflicting worlds; There is No Map wrestles with paradox and invites the listener to take a seat, sweat along and tackle their own internal struggle.

In the end, there is no map to center of one’s soul. It’s an existential journey and one that promises to be a landmark for Sam Morrow and anyone willing to listen.