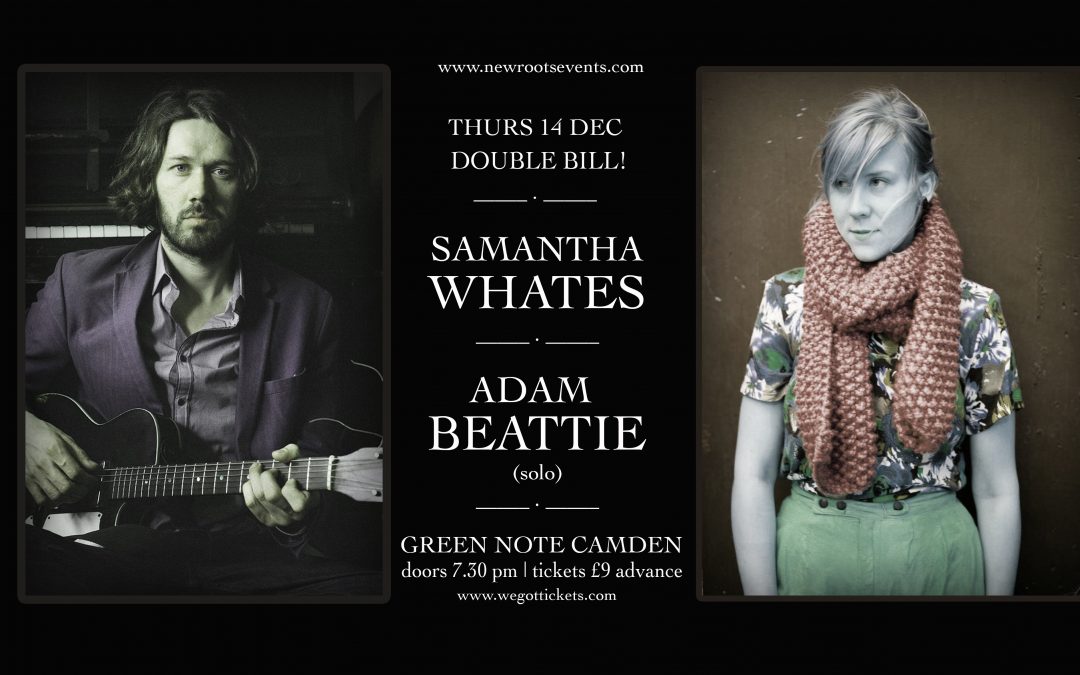 Scottish singer songwriter Adam Beattie released his fourth studio album ‘The Road Not Taken’ in May 2016 with a sell-out show at Hoxton Hall in London and a UK-wide tour. Like the lost love-child of Tom Waits and Chet Baker, Beattie’s minor ballads and moody blues with a dark twist draw upon the broad influences of Celtic folk, American blues, country and early jazz balladry, his immaculate melodies combining with a poet’s ear for observation to tackle themes of life, love, death and hope. In December 2016 he was invited by long time fan Mark Rylance to perform at a Stop The War Coalition evening alongside Jeremy Corbyn and Brian Eno.

Scottish singer-songwriter Samantha Whates is a hugely respected artist on the London roots scene. Her beautifully crafted, poetic songs retain a strong affinity with her Scottish roots, cultivating a sound that is thoroughly contemporary, rooted in tradition, yet uniquely her own. She recently formed the duo Picapica with her long time friend and collaborator Josienne Clarke, winner of the prestigious Radio 2 Folk Awards 2015. Recent performances include Kings Place and the Purcell Rooms in the Royal Festival Hall. She recently released her debut Dark Nights Make For Brighter Days which has been enjoying both critical acclaim and radio play (BBC 6 Music, KCRW, Resonance FM).

Plus Special Guest…. PINEY GIR
Legendary London-based American artist Piney Gir (‘the Indie Dolly Parton’) is a musical institution- her songs have appeared in everything from Gray’s Anatomy, Being Human and Made In Chelsea, to feature films Nina Forever and American Girl. She’s a veteran of the festival circuit, from Glastonbury and CMJ to South by Southwest, and has collaborated with members of Stereolab, British Sea Power, The Brian Jonestown Massacre and Simple Kid. She’ll be singing some of her favourie Christmas songs with long-time friend and musical accomplice Samantha Whates tonight- a real Christmas treat!