Nashville in the round: Sarah Darling + Jenn Bostic + Kyshona Armstrong 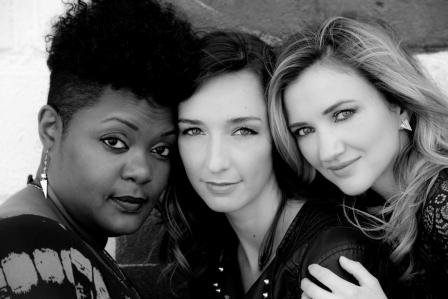 A taste of Nashville comes to the UK in September 2016. Nashville in the Round will comprise three Nashville residents and wonderful female voices performing together and individually whilst supporting each other. An evening in the style of the Nashville’s famous Bluebird Café as Sarah Darling, Jenn Bostic and Kyshona Armstrong, each recording artists in their own right come together for an evening of songs in the round from the music city.

SARAH DARLING:
Sarah Darling is sure to take you on whimsical ride through songs about stars, and when cowboy’s use to ride away into the West. She calls her sound Dream Country.
Over her career Darling has released several albums with 1/2 a million downloads worldwide. Her biggest hit, ‘Home to Me’ lead to performances on Conan O’Brien, Fox & friends, and opening for artists like Carrie Underwood and Kacey Musgraves.
The dream of playing the Grand Ole Opry came pass Feb 2011, when Sarah debuted. Her next Grand Ole Opry appearance will mark her 82nd performance on the historic stage.
Darling is getting ready to release new music this spring. From wishing on wandering stars, to never giving up, it really captures the spirit of the ones who love to dream.

JENN BOSTIC:
Jenn Bostic is a Minnesota native, currently residing in Nashville, TN.
Her emotive songwriting and powerful vocals have been touching hearts around the world. Jealous of the Angels, a song written for her late father, was discovered by Smooth Radio’s Simon Bates, and immediately jumped into the station’s Top 10 Most Played. The song was playlisted on BBC Radio 2, and after a live performance on BBC Breakfast it went #1 in the UK.
With her sophomore album naming her the ‘First American Independent Artist to have their first three singles playlisted at BBC Radio 2,’ in June 2015 she followed this with the release of her third album Faithful. It debuted on popular UK television program Songs
of Praise, followed by a CD release concert in London, a one month tour of Germany, and a full band tour in the US.

KYSHONA ARMSTRONG:
Named one of the “Top Five Roots Artists to Watch” by CMT Edge, Kyshona has dedicated the past 7 years to bringing music to those that may feel they are forgotten. Singing in nursing homes, senior centers, youth detention centers and youth empowerment programs, Kyshona started writing music with her patients when she worked as a music therapist.
She has three independent releases under her belt, 2008’s EP “Music”; 2011’s EP “Home Again”; and 2014’s crowdfunded full length album, entitled “Go”.
She currently resides in Nashville where she is writing, touring and donating her time to performing for incarcerated women in New York and Tennessee.