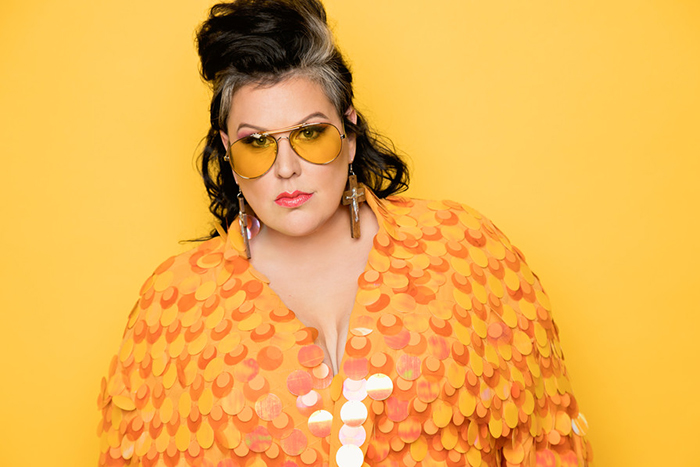 “I work for me,” Sarah Potenza declares at the beginning of Road to Rome, kicking off her second solo album — a record of self-empowered R&B, swaggering soul, and contemporary blues — with her own declaration of independence.

Filled with messages of self-worth, determination, and drive, Road to Rome shines new light on a songwriter whose career already includes multiple albums as front-woman of Sarah and the Tall Boys, a game-changing appearance on The Voice, and an acclaimed solo debut titled Monster. Released one year after she sang in front of 12 million people during The Voice’s eighth season, 2016’s Monster prompted Rolling Stone to gush, “Potenza is to the blues what Adele is to pop: a colossal-voiced singer who merges her old-school influences with a modernistic sound.” Three years later, that sound deepens and intensifies with Road to Rome, an album that shows the full scope of Potenza’s aims and ambitions.

And just who is Sarah Potenza? She’s a songwriter. A bold, brassy singer. A businesswoman. A proud, loud-mouthed Italian-American from Providence, Rhode Island, with roots in Nashville and an audience that stretches across the Atlantic. Road to Rome spells it all out. Co-written by Potenza, produced by Jordan Brooke Hamlin (Indigo Girls, Lucy Wainwright Roche), and recorded with a female-heavy cast of collaborators, the album isn’t just her own story. It’s the story of all artists — particularly women, who remain the minority within the male-dominated music industry — who’ve learned to trust their instincts, refusing to let mainstream trends dilute their own artistic statements.
.
Support from David Robert King: The Bluegrass Situation has raved about singer/songwriter David Robert King by saying, “If you appreciate the likes of Leonard Cohen and Tom Waits, you might well enjoy what he’s up to.” Accolades are coming in for the troubadour and his album IDAHO, which will be released on February 16.  Mary Gauthier, King’s longtime collaborator, began the wave of praise when she noted, “IDAHO, David Robert King’s new record, is a stunning soundscape of whispered confessions and poignant observations. A beautiful collection of haunting songs, it deserves a good listen.”  Grammy-winning singing titans The Blind Boys of Alabama also approve, as they came on board to augment King’s brooding vocals with their harmonies on the title track “Idaho.”King recently performed at the 30A Songwriters Festival, alongside Steve Earle, Emmylou Harris, Mary Gauthier, Patti Griffin and many more. King has also shared stages with Josh Ritter, The Mark O’Connor Band, Tim O’Brien, Loudon Wainwright III, Darrell Scott, and Over The Rhine. He has collaborated with Emily Saliers of The Indigo Girls, Jonatha Brooke and others. This combination led to a top 40 song on folk and roots radio, wide critical acclaim, and a featured spot at AMERICANAFEST 2017. King was also named a finalist in the 2017 NewSong Music Competition, performing last month at Lincoln Center in New York.