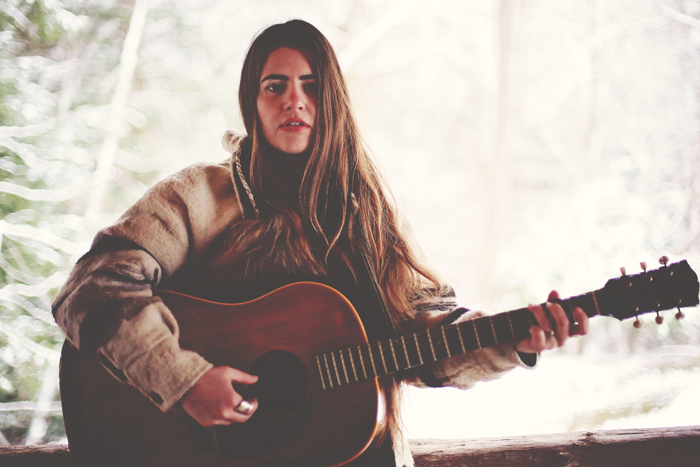 SENORA MAY: Senora May’s music and voice undulates like the foothills, hollers, and benches of the Appalachian Mountains she calls home. A frugal lifestyle in rural Kentucky has contributed to her experience in and commitment to self-reliance, resiliency, hard work and independence. Senora is known for merging the realism of these intrinsic values with a soft, romantic approach at storytelling. Her songs are an optimistic yet gritty portfolio of her habitat, exhibiting the triumphs and tolls of hard loving in a hard culture. As listeners join the rapidly growing fanbase of Senora May, they are transported to a homestead in a simpler time of the mountain culture, while clinging to gender equality and other invaluable lessons taught by present day constraints of society.  Her songs, like the artist herself, are adamant on maintaining the delicate balance of these forces for an honest translation of her experiences as a woman born unto the Appalachian Culture, a woman in love with nature’s cyclical offerings of life and death and the gettin’ by in between.

Senora’s childhood,  growing up the second youngest of 6 children, taught her to value the natural world and human connections. She often romped around catching snakes, making mudpies, picking wildflowers, trying to impress her brothers with bluegill or bass she caught and seeking approval of her father who worked religiously. Just over the hill, her grandfather provided an unnerving set of standards as an avid outdoorsman that would imprint her ideal of men forever; He was tough, seemingly devoid of emotional inconsistencies women are often associated with. On the contrary, her mother, a stained glass artist herself, was a constant and romantic support system for the arts, encouraging Senora to explore multi-media expression, including but not limited to violin, oil painting, stained glass, pencil drawing, charcoal, watercolor, flute, poetry, mosaics, woodworking, ceramics, creative writing, natural dyes, crocheting, and of course, guitar, singing and songwriting.

Many of Senora’s songs were inspired by her encounters with solitude. Some were born from her traipsin’ around Europe in college when she lied to her parents about the duration of her study abroad. She’d hitchhiked from Ostia, Italy to Dublin, Ireland, across countries, through major cities and along dirt, back roads finding refuge among the kindhearted folks of rural Slovenia, Germany and England. Some songs were conceived while she lived in a yurt in the Redlick Valley, where a wood stove and her dog, Lucy were among her only constant companions.

Her debut album, Lainhart, exhibits her songwriting techniques of storytelling through living and loving with the hope that these songs are the start of a long conversation between her encounters and her fans. This premier album is, simply put, a fine introduction of her potential as a vital voice in the history of Kentucky and Appalachian culture.

Senora May lives in Estill County, Kentucky, home of Kickin’ It On The Creek, The Ravenna Railroad Festival, Pickin’ in the Park, Steam Engine Session Room, La Cabana, numerous Carhartt facilities, and one radioactive landfill.