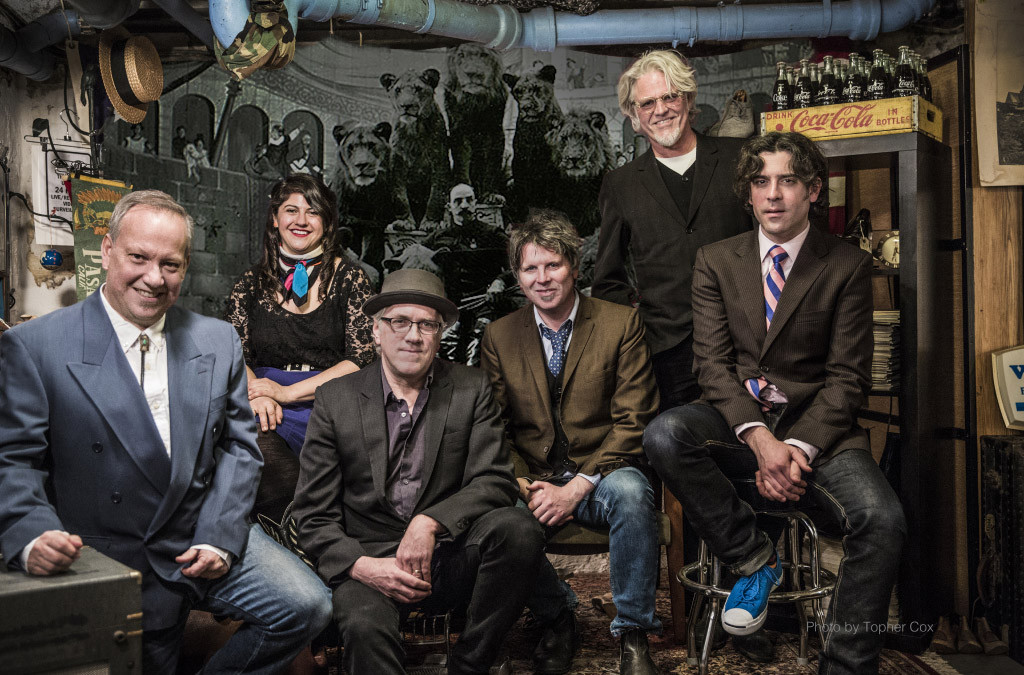 SESSION AMERICANA: This band/collective of talented musicians craft a musical experience unlike any other. On stage is a collapsible bar table, wired with microphones, a vintage suitcase recast as a kick drum, an old Estey field organ, a pre-war parlor guitar, a mandocello and all of its smaller siblings, a harmonica case fire damaged when Jack’s bar went up in flames and graffitied by Depeche Mode roadies, and an assortment of other instruments that get passed around in this freewheeling modern hootenanny. The anything-could-happen feel of a Session show depends on craft that’s not accidental or easily won; they bring a kind of ease and genuineness to this timeless music, sometimes presenting the latest batch of original songs, sometimes reaching back into depths of the American “song bag”.

“Session Americana has developed into a travelling medicine show which eschews snake oil in favour of an
ongoing grail quest for the perfect collaborative experience.” -Hot Press ROI !

“I’d give them 100 miles. That is to say, if they’re playing anywhere within 100 miles of your home, you drive
there and are grandly rewarded for your effort.” – David Greenberger !( American artist, writer and radio commentator)

“The Marvel’s Avengers of Boston’s burgeoning Americana music scene, these guys have finally put out an album that meets or exceeds the promise of their engaging, inspiring live performances”
– Boston Business Journal !

“(Love and Dirt is) a contemplative soul searcher boasting a contemporary edge cut with rustic twang; Session Americana comes up with some gems, full of folk’s honesty and rock’s urgency.” -Boston Globe

“It’s a wild trad ride that’s definitely worth hopping on board with” Time Out, London