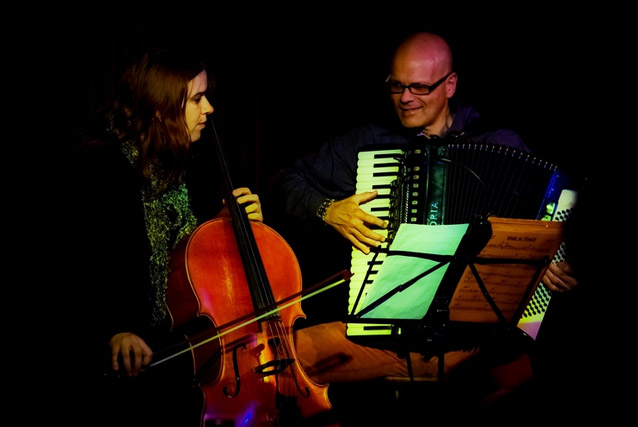 Shirley Smart and Maurizio Minardi’s repertoires span music from classical genre, jazz standards, tango and music from North Africa, the Balkans, and Eastern Europe, all re-imagined though jazz-inspired improvisation. Tonight they perform an evening of gypsy jazz favourites, interspersed with original music and tunes from around the world.

Shirley spent many years living in Jerusalem, where she studied and performed a wide variety of world music from the Mediterranean and Middle Eastern region, as well as being highly involved with the jazz and improvised music scene. Since returning to the UK, she has quickly become known as one of the most creative cellists on the music scene and has worked with many leading jazz and world music groups, including Antonio Forcione, Gilad Atzmon, Neil Cowley, Julian Ferraretto, Alice Zawadski and Robert Mitchell as well as leading her own projects.

Multi-instrumentalist and composer Maurizio Minardi has recorded 9 albums and performed with a number of artists including Carmen Souza, Antonio Forcione, the Royal Shakespeare Company, Georgia Mancio. Maurizio has played in a range of venues and festivals, including BBC London, Pizza Express Jazz Club, the Royal Albert Hall Ignite Series, Upstairs at Ronnie Scott’s, Kings Place Festival, The Vortex, the Apollo Hammersmith, the Lost Theatre, and more.