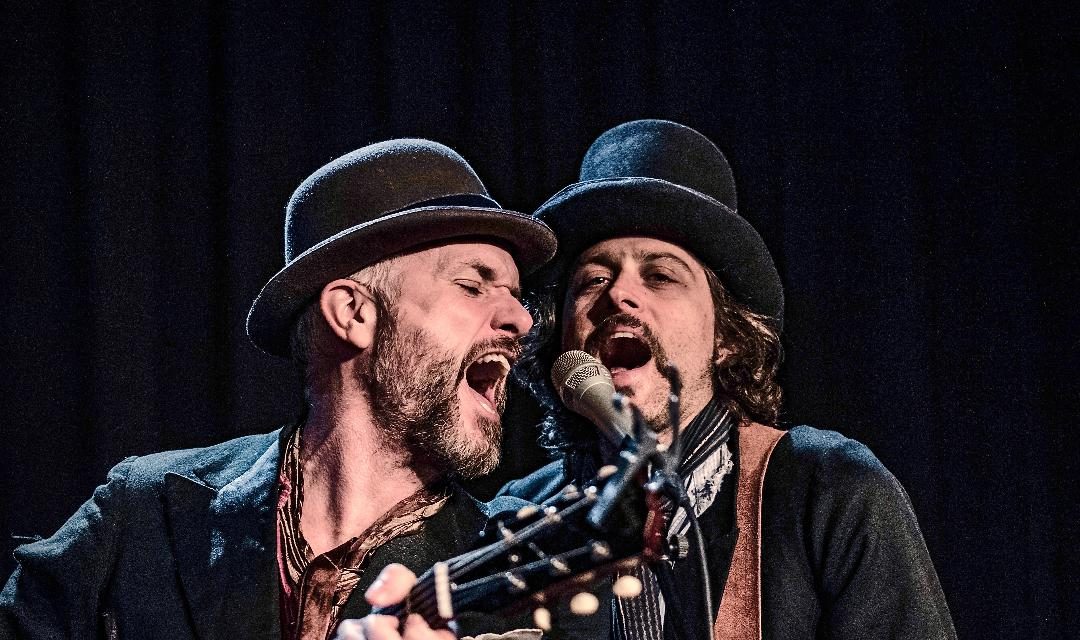 Imagine if Simon and Garfunkel were lost at sea, salt on their skin, wind in their beards, and whiskey in their bottles. With only the endless sky above, the wine-dark waters below, and one brush with death after another, what songs would they sing whilst stomping on the boards of their boat like melodious madmen?

Welcome to the mythic world of SON OF TOWN HALL, the unusual union of Ben Parker of London, England, and David Berkeley of Santa Fe, New Mexico. Parker, a highly sought-after London-based songwriter/producer/multi-instrumentalist, and Berkeley, a celebrated singer/songwriter/guitarist/author create a world that transcends time and space, complete with shabby Victorian-era outfits, meditations about the sea, and songs that beg you to sing along. It will leave you transformed, with your heart full of laughter and tears, drunk on adventure and the tragic beauty of the human condition.

Despite the incongruous pairing, Parker and Berkeley sing together with an angelic blend, a harmony so sublime you will think it the work of witchcraft. It’s why they are in such high demand, selling out rooms around the world, performing at the Philadelphia Folk Festival, The Lyons Folks Festival, The Dusseldorf Festival, The Dranouter Festival, The Medicine Hat Festival and many more.

The critically acclaimed duo has just completed its debut full-length album, an astonishing collection of songs featuring Sara Watkins on fiddle, members of Beck and De La Soul’s horn section, a string section from Atlanta, GA, and a German choir. Releasing this November, the album was mixed by Grammy-nominated Darren Heelis (Avett Brothers, Sam Smith, Rag n Bone Man). The packaging alone warrants notice, featuring an original India-ink portrait of the pair by D.C. Lamothe and a reprint of a wonderful article written at the turn of the century about the two, describing their checkered pasts and their rise to musical glory.

Son of Town Hall’s performances aren’t quite like any other. The show is three-parts concert, one-part theater. The songs stand alone, profoundly poetic turn of phrases sung with voices so perfectly matched it is nearly impossible to tell them apart, and accompanied by intricately finger picked parts played on old Gibson. But the presentation sets them apart from every other guitar-slinging songwriting team out there. Parker and Berkeley are disarmingly charismatic, and despite the deadpan delivery, their between song repartee is absolutely hilarious. The affection they feel for each other is contagious, and audiences leave in love with both of them and perhaps more in love with life in general.