Songwriters in the Round – Charlie Dore + Jack Henderson + Blair Dunlop 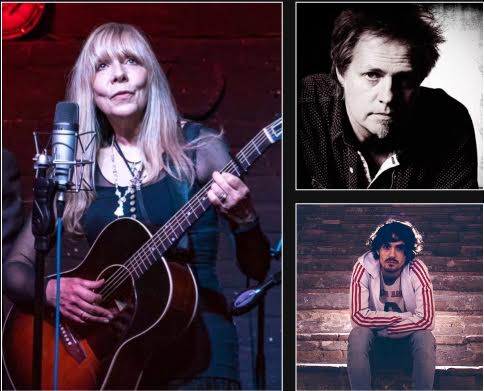 SONGWRITERS IN THE ROUND… Nashville style Songwriters Circle, with some of UK’s most exciting singer songwriters.

Charlie Dore is one of the UK’s most respected songwriters. In an unusually diverse career her songs have won two Ascap awards, an Ivor Novello nomination, both the Overall Grand and the Folk Prize from the International Acoustic Music Awards and Best Album Lyrics from the US Indie Acoustic Project.
She has also worked as an actress in theatre, film and tv and co-founded London Comedy Impro venue, The Hurricane Club, which ran for 7 years.
While her own albums favour her more eclectic/roots leanings, she is one of a handful of UK writers to achieve success across many genres, defined by the range of artists to have recorded her songs, including Tina Turner, George Harrison, Celine Dion, Lisa Stansfield, Paul Carrack, Ricky Ross and Jimmy Nail, notching up along the way a UK No 1, a US No 4 and Top10 hits in Italy, Germany and France. She has also composed for three BBC drama series and two films.
Charlie released her 9th album, Dark Matter in 2017 and is currently touring the UK with long-time collaborater Julian Littman. She still enjoys writing for and with other artists and also mentors emerging
songwriters when she’s not touring.

‘A songwriter of exceptional talent…what singles Dore out from the rest is her lyrics. One of the UK’s most original talents.’ – Rock&Reel

‘Henderson is a crooner and a rocker, a romantic and a raconteur singing dark, moody songs’ – Maverick

Henderson has the travelled air of a Jack Kerouac: born in Scotland, brought up in Portsmouth and London before heading west. As well as performing his own material during his years in the States Henderson toured and recorded extensively with Americana band Over The Rhine, rootsy Canadian outfit Cowboy Junkies and shared stages with the likes of Buddy Miller, Sarah Mclachlan and Ron Sexsmith.
Henderson’s latest studio album, This Daring Light, was recorded in New York with Patti Smith’s producer and bass player, Tony Shanahan and features contributions from Marc Ribot, (Tom Waits, Elvis Costello), Tony Garnier (Bob Dylan, Paul Simon), Jon Graboff (Ryan Adams, Sheryl Crow). However, as Jack is keen to point out – ‘The most important thing remains the song. That’s what has to stand up. If it doesn’t everything else is a waste of time’.

Blair Dunlop, the award-winning British singer, songwriter and guitarist, has now released 3 albums 2 ep’s and toured widely around the globe.  All of this in a short 4-year career is astounding alone but what sets Blair apart from his peers is the lyrical and musical maturity with which he writes.  His third album ‘Gilded’ was released in May 2016 on his own label – Gilded Wings – and was widely acclaimed gaining BBC Radio 2 Playlist status for the two single releases (‘The Egoist’ and ‘356’) both of which were remixed by Ed Harcourt.  Prior to this Blair released his acclaimed album ‘House Of Jacks’ in mid 2014 which lived up to the promise of his 2012 debut ‘Blight and Blossom’ (the quality of which contributed to his winning the BBC Radio 2 Horizon Award).  Blair has now cemented his place as one of Britain’s most exciting talents to come from the folk scene. The Guardian stated that the ‘House Of Jacks’ proves Blair is ‘an increasingly adventurous songwriter’, Uncut reviewed it as ‘thoughtful and exploratory’, The Independent on Sunday described it as ‘fluent, lamentory and accomplished’ while Q Magazine wrote that House of Jacks is ‘an exciting glimpse of where traditional folk might go

“The busy crowd…is testament to Dunlop’s talents.  Dunlop brings an air of tenacity while displaying a fine repertoire of well-crafted songs spanning traditional and contemporary.  He’s determinedly taking the traditions of folk in his own direction” – THE INDEPENDENT – Live review 2014