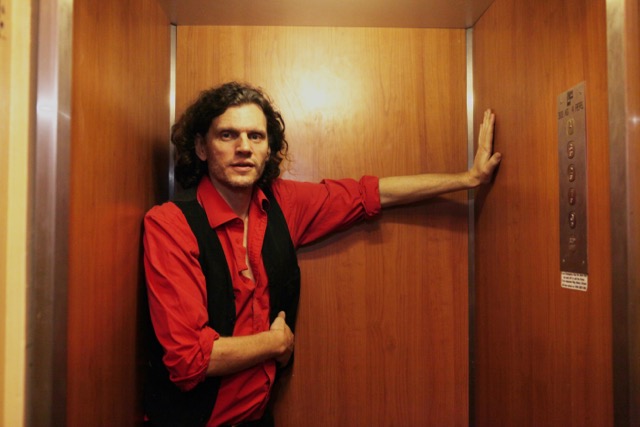 SPOTTISWOODE  & WALTER SALAS-HUMARA
Referred to as a “genius” and a “downtown ringleader” by The New Yorker, Spottiswoode is the son of an American opera singer and an English clergyman. WNYC’s legendary DJ John Schaefer describes him as “one of New York’s more colorful band leaders for more than a decade.”
For the past two decades, the Anglo-American has been the frontman of Spottiswoode & His Enemies, a septet that has become a New York institution. With the band, Spottiswoode has released six acclaimed records, performed numerous Manhattan residencies, and toured extensively from SXSW and Lille Europe to Lincoln Center. The band’s gothic rock opera, ABOVE HELL’S KITCHEN, was presented in 2010 to sold-out crowds at the New York Musical Theatre Festival.
In addition to recording with his Enemies, Spottiswoode has also released three solo albums and a duo collection. His songs have been featured in a wide variety of films and television shows. He has been nominated for five separate Independent Music Awards, winning Best Adult Contemporary Song in 2012 for his piano ballad, Chariot.
Spottiswoode’s music travels the gamut, drawing comparisons to Leonard Cohen, Ray Davies, Nick Cave, Tom Waits, Randy Newman and Jim Morrison. Still, he’s very much his own man. He “evokes real emotions, sometimes different ones in a single song” (Dan Reed, WXPN).
Walter Salas-Humara is the founder and frontman of The Silos, the legendary rock/punk/alt-country band that was voted “Best American Band” by Rolling Stone Magazine way back in 1987. Since then he has released a slew of critically-praised and infectiously upbeat albums both on his own and with the band.
Walter’s latest, Walterio (Rhyme & Reason Records), combines punk-edged rockers, bittersweet ballads, a Spanish anthem about his Cuban/Galician roots plus a closing co-write with Brooklyn novelist, Jonathan Lethem, long-time friend, collaborator and one of Walter’s many many fans.

Press for Spottiswoode
“Genius” John Donohue (New Yorker Magazine)
“Nothing short of transportive” Steve LaBate (Paste Magazine)
“His roughed-up baritone and scalpel-sharp songwriting tie all his genre-jumping together in a squirming sack of sunny songs, off-kilter cabaret and breathtaking honesty. Scary, hilarious and touched by genius.” Michael Walsh (Charlotte Creative Loafing)
“He doesn’t simply sing his songs, he inhabits them. Whether it’s a mesmerizing and hushed lullaby about the pouring rain, a randy cabaret waltz with winking rhymes, or a galloping noir rocker that builds to a psychotic climax, Spottiswoode draws you in.
The dapper (and sometimes playfully unhinged) singer/guitarist is both down-to-earth and as intense as Nick Cave and Leonard Cohen, with a little wild Joe Cocker soul in there, too.” Ken Maiuri (Northampton Gazette)

Press for Walter Salas-Humara and The Silos
“The band’s austere style inflects the astringent twang of The Velvet Underground with the drone of R.E.M. and adds countryish echoes that recall Gram Parsons.”
Stephen Holden The New York Times

“Powerful earthy pop that sounds like the result of Nirvana riding on R.E.M’s tour bus.”
Buzz McClain The Washington Post

“Someday we’ll brag about them to our grandchildren, they’re that good.”
Bill Flanagan Musician Magazine