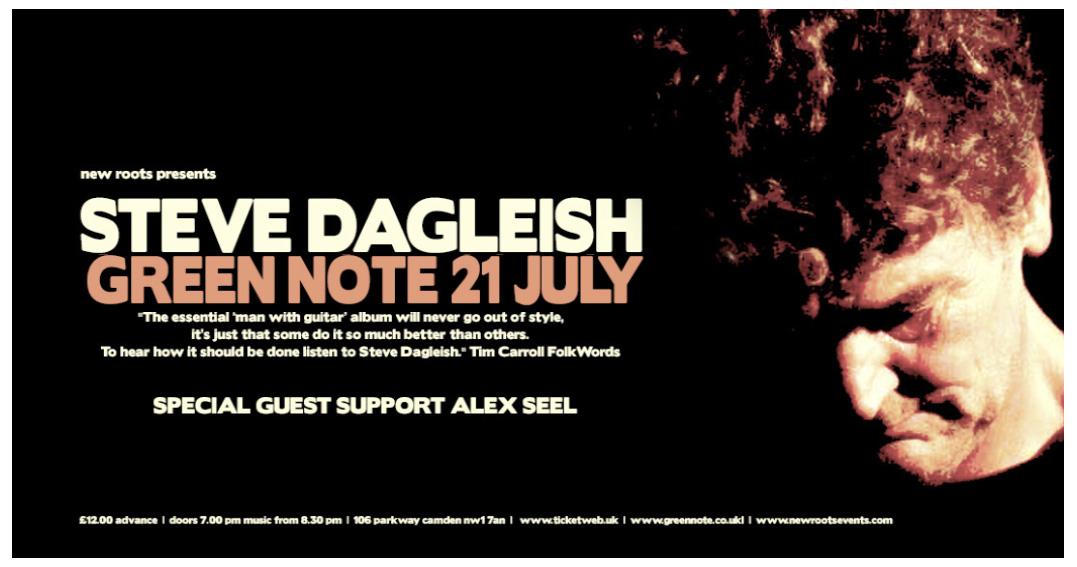 The quintessential folkie, STEVE DAGLEISH’s style follows a long line of great British singer-songwriters, from Roy Harper to John Martyn. His beautifully compassionate songs range from the personal to the political, always sung with searing honesty and told with a razor-sharp focus on the things that truly matter. He plays this evening accompanied by Carolyne Locher on backing vocals.

“The essential ‘man with guitar’ album will never go out of style, it’s just that some do it so much better than others. To hear how it should be done listen to ‘Yours for Eternity’ from Steve Dagleish.” – Tim Carroll FolkWords

ALEX SEEL’s beautifully crafted, warm, rootsy song-writing style with thought-provoking lyrics and a gift for acoustic guitar finger-picking has gained him a growing reputation as a solo performer, having performed around UK, Ireland, Italy, Germany and Spain.

“…a mastery of fingerpicking techniques and a repertoire of unusual chords; a fine poet with a very personal vocal style..
…listening to Alex in concert is balm to the soul…” – Rolling Stone Magazine

“Exquisite and powerful songs from one of the best composers, guitarists and singers in the UK today. Alex Seel has influences from blues, pop and the British Folk Revival guitarists but his sound is all his own” – Twickfolk