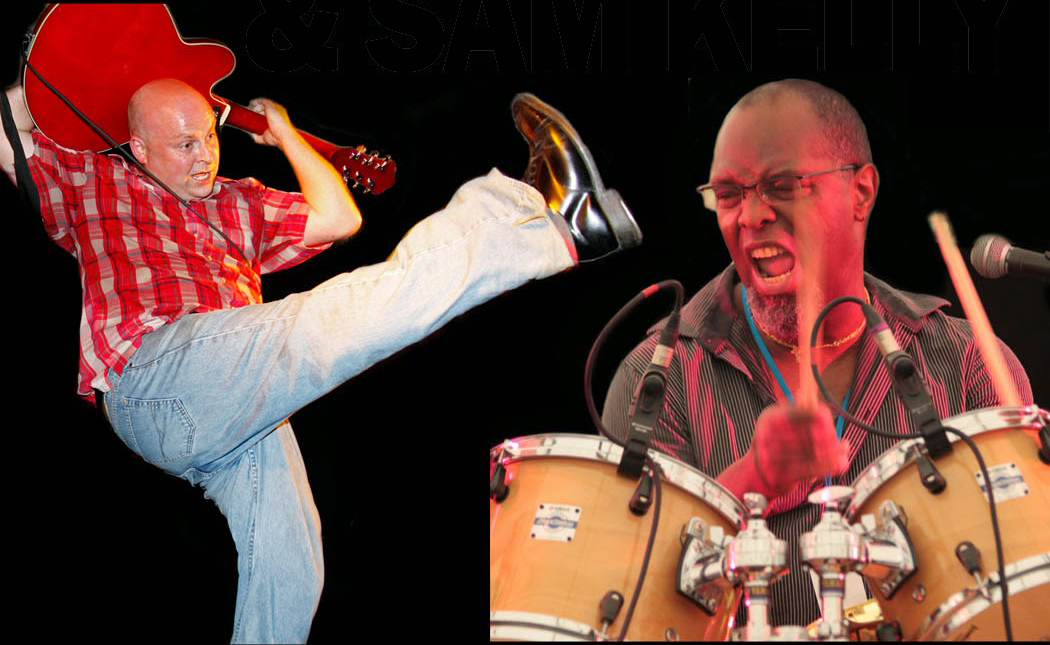 Stompin’ Dave teams up with drummer Sam Kelly for a feast of blues, and boogie at Green Note. Described by Maverick Magazine as “one of the world’s greatest performers“ and Blues In Britain as “a downright genius.” Bridport based Stompin’ Dave is a vocalist, multi instrumentalist and dancer.

With twenty five years of performing experience Dave has worked exclusively as a musician and performed across the UK and beyond including major festivals such as Glastonbury, Bestival, and Camp Bestival, etc. A former member of former UK blues band of the year The Producers, Stompin’ Dave was nominated for a British Blues Award in the acoustic act category 2014. Winner of the FOAOTMAD old-time banjo competition 2011 and 2013.

Dave has stomped onto the line-up of some top specialist music festivals including Cork, Warwick, and Towersey folk festivals, Ealing, Upton, and Ashburton blues festivals in addition to many other appearances at festivals, music clubs, art centres and theatres. Dave has been invited to play the Boogaloo Blues Weekends on the Isle of Wight the last eight years, The Great Dorset Steam Fair the last ten. “Stompin’ Dave is a master of all kinds of American roots…a formidable musician and a true original.” The Daily Telegraph.

London based Sam Kelly has been voted into Blues In Britain magazine Gallery of the Greats as a five-times winner of the UK Drummer of the Year award. Sam has recorded albums with Gary Moore, Ruby Turner, and Stan Webb. Over the years Sam has performed with such well known artists as Dr. John, Ben E. King, Robert Plant, The Foundations, Chaka Khan, Billy Ocean, and Michelle Shocked among many others. Sam has in recent times performed with Paul Jones, Imelda May, Andy Fairweather Low and Chris Barber. In 2014 Sam was awarded first place in the drummer category for Blues Matters Writer’s Poll. Runner up in the British Blues Awards 2016.

Sam was an original member of renowned 1970’s British funk band Cymande who attained US Billboard R&B chart success with tracks such as Bra, Dove and The Message. The band became the first British based band to perform at the world renowned Apollo Theatre in Harlem, New York. Cymande reformed in 2014 and Sam has subsequently toured with them in the USA, Brazil, Turkey, Iceland, Montenegro, Croatia, France, etc. In 2017 they headlined Ronnie Scott’s for three nights.

Dave and Sam’s first album together Live From The Sticks released in 2015 received excellent reviews. Blues In Britain recounting “a rampaging set of electric blues” and praising “the rapport and sheer enjoyment of these two fine musicians operating in tandem.” Blues Matters concluded the album was “nothing short of classic juke-joint blues from the sticks.”