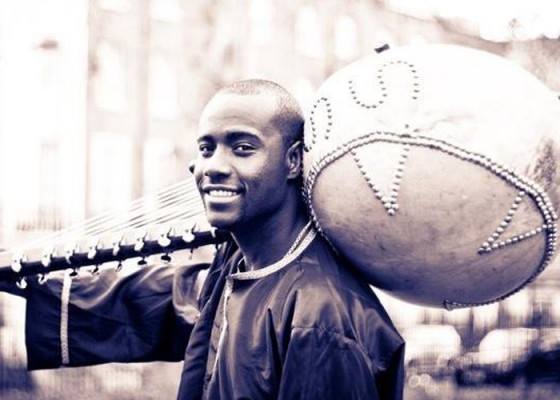 Sura Susso is a creative, versatile and talented Kora player & Percussionist, who hails from a Traditional Griot family in Gambia West Africa.

He is the son of Mamudou Susso and Fatou Binta Cissokho, well-respected musicians in there own right and the younger brother of Seckou Keita who is also a accomplished and successful Kora player.

Griots are historians, orators who hold family and village records. Praise musicians and singers pass this information down through the generations from father to son. Sura’s first initiation to the Kora was at the age of four.

The Kora is a 21 stringed traditional instrument, which is able to transfer beautiful twined melodic & rhythmic tones.

At the age of seventeen, Seckou Keita invited his younger brother to join him on tour, sharing his talent as a percussionist. Performing in many countries around the world, this gave Sura the opportunity to shape his skills and experience as a performing artist.

Exhibiting his talent in an assortment of countries, venues and festivals, Sura was invited to perform at an opening ceremony at Manchester City Hospital playing for her Royal Highness Queen Elizabeth II in 2012; he has also partaken in a number of joint ventures, collaborating with a variation of skillful musicians. In 2009 Sura and his Sister Binta Susso, had the privilege of performing at Glastonbury festival with the legendary Baaba Maal.

Sura’s musical gift, once heard, is not easy to forget. His melodic style resonates deep within, transporting you far away to a harmonic place of sheer delight.