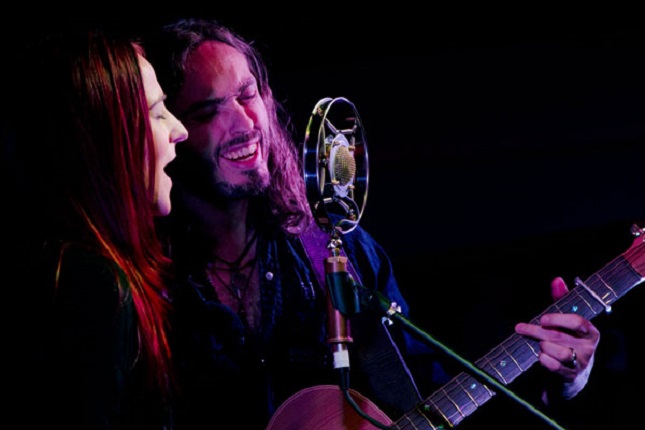 The ability to write songs that are both modern and ancient is a rare thing. The product of an arcane art of weaving in traditional influences so thoroughly that they become the warp and weft of fresh creations. THE BLACK FEATHERS, made up of Ray Hughes and Sian Chandler, are two such talents. They first became aware of the magic between them while collaborating on several musical projects, becoming The Black Feathers and life partners in 2012. Americana, Folk, and Acoustic Indie Rock sensibilities coexist comfortably in their musical world, with Hughes’ guitar work buoying the kind of harmonies often only heard in family bands. Their music quickly draw the interest of listeners, but it is the stage chemistry that will keep them riveted. Having already built up a loyal following in the UK, The Black Feathers have been spreading their wings across the US. They have performed at Philadelphia Folk Festival and AmericanaFest, and have also been awarded official showcases at the North East Regional and Far-West Folk Alliance conferences. With a new single and a live album in the pipeline, these are exciting times for what FATEA refer to as “a duo of undeniable talent”.

“Once in a blue moon, the whole soars far above the sum of its parts. That’s what happens when The Black Feathers perform live” – Black Mountain News, North Carolina

With support from PAUL HANDYSIDE.

Paul Handyside was singer and songwriter with eighties indie darlings Hurrah! who had album releases on Kitchenware and Arista Records. His first solo album was Future’s Dream released in 2007 “…an articulate craftsman who cares more about quality than the latest fashion and each tune is a delightful labour of love” Morning Star.

Followed up with Wayward Son in 2013 “…a collection of songs that genuinely affect, move, touch and manipulate the senses. It’s powerful stuff…Class oozes from this album from start to finish” Americanauk.

His third album Tide, Timber and Grain released in 2016, “…subtlety and finesse and a rich vein of melancholy. It’s a flawless piece of folk narrative. Handyside has produced a hauntingly melancholy album to provide a framework for his marvellous voice; it’s a powerful combination.” ****MusicRiot.co.uk.

Live, Handyside is accompanied by Rob Tickell on guitar. They will be previewing material from the forthcoming new album due for spring 2020 release.