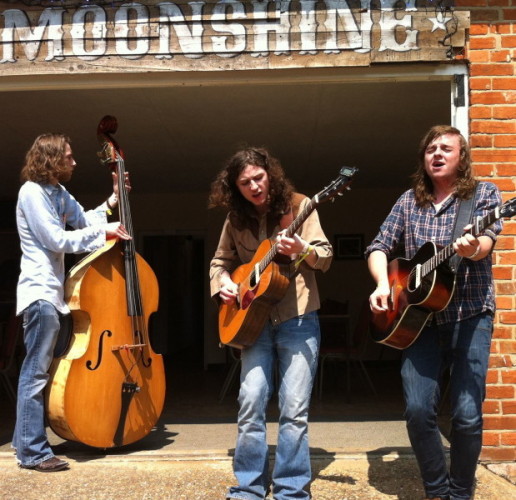 Roll up Roll up – It’s Showtime ! It’s the Greatest show on earth. You thought you knew country music, well, think again ! with just an upright bass, two old guitars and a bucketful of aching harmony, The Goat Roper Rodeo Band are preaching ‘Country Blues’ like you never heard… it’s up, it’s down, it’s soft and loud, it’s dark and lonesome too, there’s hurt and shame and some mean old pain but there’s love in what they do ! There’s a hint of Gram, a sniff of Dylan and a twist of Waylon’s blues … Simply put, it’s exactly what it says on the tin…they look great, sound great and they’ve got a bunch of absolutely brilliant songs !… and that’s the truth, the whole truth and nothing but the truth…amen.

“Maverick festival was discovery time for the Spiral team as we took in the ragged glory of The Goat Roper Rodeo Band. Hailing from North Wales, The Goat Roper Rodeo Band take a slightly psychedelic route to the finish line and include some serious foot stompin’ rock ‘n’ roll along the way, mix in a little gospel fire and a sprinkle of Gram and these boys ruled our last afternoon.” Spiral Earth – ‘live’ review – Dave Kushar

“The Goat Roper Rodeo Band play affectionate homage to unassuming country-blues and theirs a stylishly accomplished take, a masterly slice of underplayed lonesome aching with a great harmonic richness that leaves us in exactly the right frame of mind to be clamouring for more.” Fatea – ‘Hail The Remedy’ album review – David Kidman

“These guys sing about the dark side, about doing wrong when you know it’s wrong. They sing about the joy to be found deep down in the blues. When they sing a love song, it’s about lost love, love destroyed so completely that the will is truly broken and with their odd lead voices and bluegrass tinged harmonies, The Goat Roper Rodeo Band succeed.” Rambles.net – ‘Hail The Remedy’ album review – Michael Scott Cain

“With refreshing, startling vocal harmonies and quirky song writing skills, these young’uns can roll out a fab sombre number just as well as an upbeat one, the Goat Roper Rodeo Band possess a uniqueness and quality that promises success and lovers of this old timey sound are simply going to love this.”
Maverick magazine – ‘Hail The Remedy’ album review – Emily Saxton.

Michele Stodart is a solo artist as well as bassist, vocalist and co-songwriter with much loved, Mercury-Prize-nominated band The Magic Numbers, who recently released their fourth album, Alias, in 2014. The album Alias was well received by critics, with several calling it their finest to date, and received **** in Q and Uncut. Over the summer, the band supported Neil Young & Crazy Horse and then toured the UK, Ireland and continental Europe.

In 2012, Michele released an album of her own songs, Wide-Eyed Crossing, a southern drenched journey into Americana country blues. In support of the record, Michele and band toured with Villagers, Alabama Shakes, Duke Special and Slow Club. She is currently touring with the Magic Numbers and working on a follow-up solo album to be released this year.

“To say that Michele’s songs are ‘rich’ is rather an understatement – it has become the norm for the majority of people at her gigs to leave either speechless, or (and more often the case) crying…. Michele’s solo music is truly breathtaking.” For Folk’s Sake