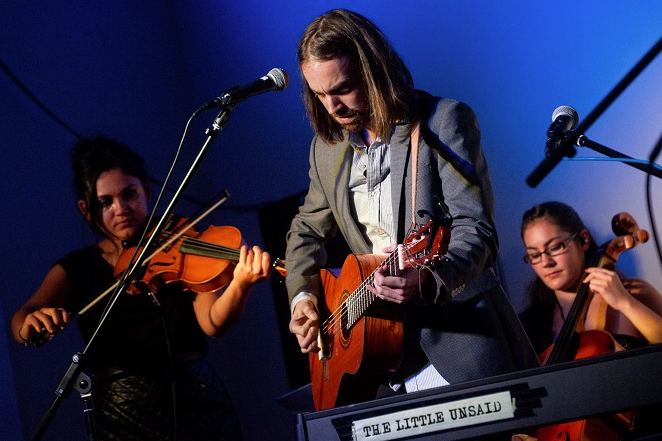 Led by multi-instrumentalist, songwriter and producer John Elliott, THE LITTLE UNSAID are recently released their fourth album, recorded with Radiohead engineer Graeme Stewart. Dots and Dashes has called The Little Unsaid ‘a giddying conflation of folk, electronica and lavish orchestration…one of the genre’s grandest successes thus far.’. Combining string and brass orchestration with electronics and found sounds, Elliot completes the picture with haunting, androgynous vocals. The Little Unsaid live show consists of a live band with string section- highlights have included touring the UK with American singer-songwriter Catherine Feeny, supports with Rozi Plain, This is the Kit and Rue Royale, and performances at Glastonbury, The Secret Garden Party and Larmer Tree.

‘Just exquisite’ – Fresh on the Net

‘Shadowy lyrics with hints of Nick Cave and the briefest glimmers of hope…a thumping depth of passion, leaving us wide-eyed and all-encompassed’ – Express and Echo

‘A giddying conflation of folk, electronica and lavish orchestration’ – Dots and Dashes

Brighton-based visual artist and singer-songwriter JINWOO’s critically-acclaimed debut ‘Your Baby’ E.P. resulted in his being named one of The Independent’s ‘Faces to Watch 2015’. His long-awaited debut album ‘Strangers Bring Me No Light.’ was released on the much respected Cargo label on 2nd Sept 2016.  The album features collaborations with Malcolm Middleton, Alasdair Roberts, Kami Thompson (The Rails) and Kylie La Grange. His sparse atmospheric folk-soundscapes, laced with ghostly string arrangements and his exceptional acoustic guitar work, offer a kind of ‘spooked’ ‘gothic’ folk that sounds like no other. ‘Strangers Bring Me No Light’ is nothing short of a seminal record and Jinnwoo a true original.
The Independent – “jinnwoo is the most singular new folk talent in some time” 4/5
The Guardian – “Jinnwoo’s gothic folk-croak is a confessional reel unspooling from his innards, a tale of circling doom”
The Line of Best Fit – “A rising talent in the folk world, Jinnwoo has been setting hearts ablaze with his off-kilter guitarisms and distinct, emotive vocals.”
—————————————————————–