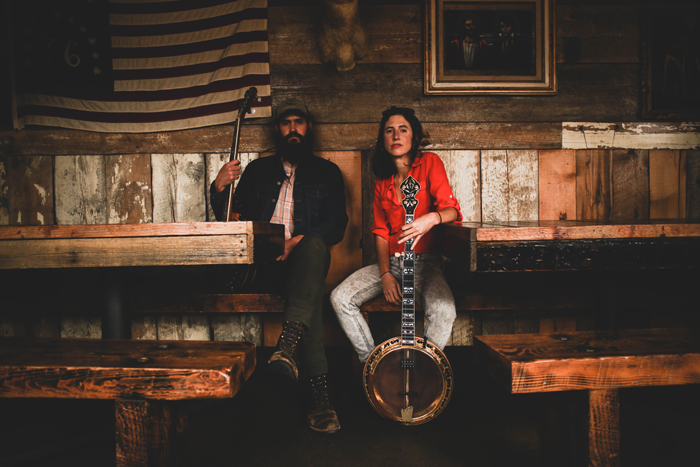 THE LOWEST PAIR: The Lowest Pair is Kendl Winter and Palmer T. Lee. Kendl comes from Arkansas, but she found her way to the Pacific Northwest after high school. The evergreens and damp air of Olympia, Washington, and the boundless music scene, had equal draw. She released three solo records on Olympia’s indie label, K Records, and performed in ramblin’ folk bands and anarchic punk bands before starting The Lowest Pair in 2013 with Palmer T. Lee. Palmer built his first banjo when he was 19 from pieces he serendipitously inherited. Shortly after deciding songwriting would be the most effective and enjoyable medium for his musings, he began cutting his teeth fronting Minneapolis string bands and touring the Midwest festival circuit, which is where he and Kendl first met, on the banks of the Mississippi. Over the next five years, they recorded and released four albums of original songs and one covers album, named I Reckon I’m Fixin’ On Kickin’ Round To Pick A Little, Vol. 1. They toured the U.S., or rather, they tour the U.S., in their own version of The Never Ending Tour, racking up over 500 shows, from Bellingham, Washington to Bangor, Maine, from The Shetland Islands to The Bell Inn in Bath. A new album from the duo is coming soon.

“If you listen to no other bands or musical outfits in the Americana genre this year, listen to The Lowest Pair. This duo isn’t interested in merely making music of a moment that’s soon forgotten – these are songs well-lived in that aspire to last long after their writers have shuffled away.”
-No Depression

“…a welcome as a worn path through familiar woods nonetheless populated by mystery and myth, holding, perpetual promise for new discovery.
…stunning records with really beautiful melodies and instrumentation.”
–Popmatters

“This duo is, I dare my hand for stabbing in the fire, one of the leading ensembles of what became a new kind of American folk music will prove to be.”
–Rootstime

“The Lowest Pair on their albums have provided a storm force breath of fresh air that has an almost overwhelming quality and originality with nothing done to bring them in line with any contemporaries, very few though they are.”
–Americana Roots UK

“The Lowest Pair are writing and recording work that doesn’t speak just to the here and now, but takes aim for posterity.”
–Skope Magazine

“There’s no way to accurately describe the unseen mystical cloud of sonic magic that The Lowest Pair create.”
–The Ark Of Music

“But far from just a plundering of times long gone, this is also a reinvention, a re-appreciation, a modern celebration of traditions and the perfect way of taking the past by the hand and leading it into the future.”
–Dancing About Architecture

“The duo has amassed a more than respectable catalog in their three years of existence and it’s a testament to their boundless skill that, apparently, they haven’t yet come close to exhausting their creative fires.”
–Music Existence

“The soft, wispy harmonies of The Lowest Pair might just become your new favorite sound.”
–Read The Horn

“Living up to their burgeoning reputation for banjo-heavy instrumentals and old- timey vocal duets, this latest full-length was recorded with Tom Fabjance in an old church in Duluth, Minnesota, harnessing the experience that the duo gained after a hardworking year performing in venues all over the country.”
–Paste

“The couple’s deep-reverb bluegrass-inspired sound, and urban-rustic appearance, and make the a perfect symbol for the Dust Bowl aesthetic ready made for listening rooms everywhere.”
–Twang Nation