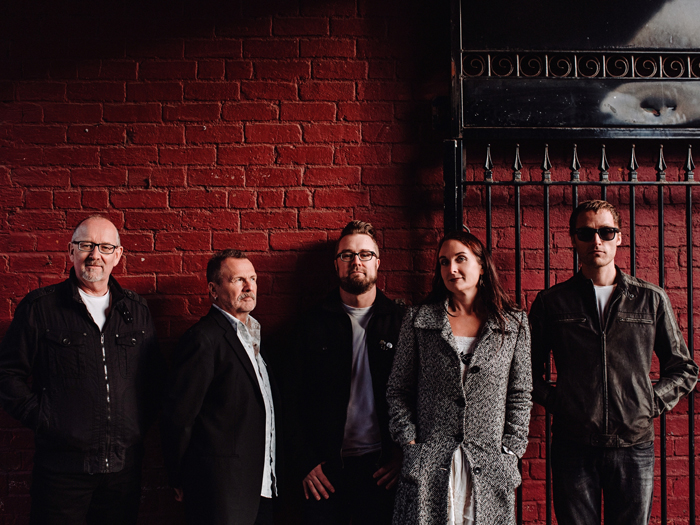 THE MAGPIE ARC: The Magpie Arc is a cross-Border band out of Sheffield and Edinburgh featuring the mul- award-winning talents and wide musical influences of Nancy Kerr, Marn Simpson, Adam Holmes, Tom A Wright (The Albion Band and Ashley Hutchings Morris-On Show) and Alex Hunter (Adam Holmes and The Embers).

Formed out of an idea to bring together a group of musicians and friends who would mix and match their influences, songwriting styles and musicianship in an electric band setting, whilst giving a passing nod to the golden age of 60’s and 70’s British folk/rock, the musical possibilities of The Magpie Arc being something special and unique in today’s folk scene became obvious very quickly.

And “a band” it is! It’s not a project, there’s not a theme and it’s not a commission. It’s five musicians in a room making an enthusiastic noise. Often pretty loudly!

There will be lots of new songs, and there will also be some great, unusual and thought provoking covers, plus there may be some reworked traditional songs. There will be folk, and definitely rock. A bit of country, there may even be some blues. Whatever happens, it is already proving to be a musical mix of everything you could expect from such a line-up, with great songs, lush harmonies and intricate electric guitars to gorgeous fiddle lines and rock solid bass and drums.

In June 2019 the band released two live video singles filmed and recorded at the Silk Mill Studios in Staffordshire, and the tracks of these, Autumn leaves and Darling Charms, received airplay on national BBC Radio 2 and on both local BBC and independent radio stations throughout the UK, stoking the new and growing buzz amongst those in the know that has surrounded the band since they formed. Writing and demoing new material over the later part of 2019, they moved into Yellow Arch Studios in Sheffield in February 2020 and recorded the basis of twelve new tracks, which were finished off as lockdown eased over the summer, with a preview video for the Nancy Kerr written song, Greenswell, being released in June. The songs are now set to be unveiled to the world in the form of three, four track EP’s which will each be released separately over the course of this autumn on a limited edion, colour vinyl 10″ record, on CD and on download. The first of these, the completely deliberately titled “EP1”, will be released on the 25th of September on the bands own record label, Collective/Perspective.

So what sort of live show can you expect? Well, with a line-up like this, it will certainly be a full “Evening with The Magpie Arc”.

There will be no support, and variety will be the key, with a first set of some solo/duo/trio performances followed by the full band second set.