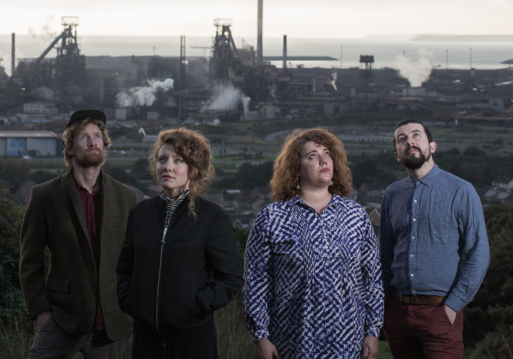 THE NIGHTJAR
Originally conceived as a close-harmony vocal trio, a collaboration with South London producer Kams brought The Nightjar to the attention of Boiler Room’s Joe Muggs. The ensuing Boiler Room debut went viral, and brought their 2015 ‘The Nightjar’ EP plaudits from nearly 70,000 underground music fans, as well as the accolade of airplay on Radio 3’s Late Junction.

A successful crowd-funding campaign convinced them of the existence of an audience for their dream-like, ethereal songs of hope, loss and disaster and, in the autumn of 2015, The Nightjar relocated to a farmhouse in rural Portugal to begin their first full-length offering.

2016 tours of France, Germany and the UK saw audiences brought to a stand-still by the raw intensity of their performance, bringing them a reputation as a must-see live band. Drawing influence from the lo-fi wooze of Grouper, the stark and poignant balladry of Diane Cluck and the deft compositions of Colleen, The Nightjar use close-harmonies, tight-interlocking guitars, deep bass and an intense lead vocal to paint fragile, haunting landscapes.

NINA HARRIES
Nina Harries is a solo double-bassist and songwriter, and graduate of the prestigious Royal College of Music. A virtuosic player, possessed of a stunningly powerful singing voice, her intense perfromance style and strikingly unique songs mark her out as a singularly original talent. She recently performed at Glastonbury and the Time Out Rising Stars Showcase 2017.