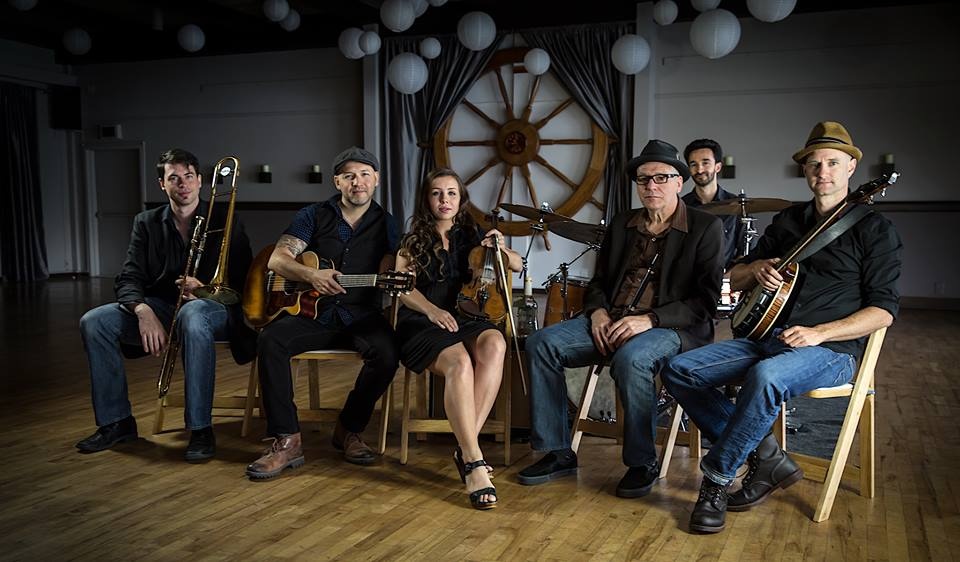 Wrapping up their 24th anniversary year, Vancouver Canadian musician Tom Landa, is looking back on the legacy of his much-loved folk rock band The Paperboys.

For two decades, The Paperboys have been touring the world and lighting up stages with their free-wheeling blend of influences from Celtic and bluegrass, to Mexican son jarocho, brass bands, and Canadian roots.

But that’s not what matters to Landa now.

“What means more to me than anything else is to receive letters, emails, or hear stories from people who tell me that our songs helped them through a tough time, or that they used one of our songs for their wedding, or that an album of ours was the soundtrack of their summer. At the end of the day, accolades are nice, but they are nothing compared to connecting with people.”

It’s a remarkably grounded perspective from a bandleader who’s been through it all, but Landa’s an open-book kind of songwriter, a Canadian grassroots poet who loves to infuse his songs with dance hooks. Even the title of their new album, At Peace With One’s Ghosts – the first new Paperboys album in six years – speaks to Landa’s approach. It’s full of The Paperboys’ signature sounds: Spanish-language songs that reflect Landa’s Mexican heritage, explosive brass lines from their extended 8-piece ensemble, Celtic fiddle and pennywhistle blazing through an old reel, English rock songs with strong pop influences, and a kind of melting pot sound that reflects not only the diversity of the band’s home city, Vancouver, BC, but also a larger vision of what modern Canadian roots music should sound like.

The Paperboys were formed in 1995 when Landa first moved to Vancouver. “As a teen living in Ontario,” he explains, “I was really influenced by the music coming out of Vancouver in the late eighties/early nineties. Seminal Celtic rock band Spirit of the West was by far my biggest influence. I packed my bags and came to Vancouver solely based on the music scene.” Over time, The Paperboys were a key part of multiple waves of popular Canadian folk rock bands that included The Duhks, Ashley MacIsaac, The Bills, and Great Big Sea. “One big difference between Canadian Celtic artists and Celtic bands in other parts of the world,” says Landa, ‘is that records made here are being produced by producers who come from a rock and pop world, and bring something very unique to the table.” For At Peace With One’s Ghosts, Landa tapped Canadian pop music producer Bill Buckingham, who brought a cohesiveness to the project by helping the band seamlessly blend their many influences.

At Peace With One’s Ghosts features the current lineup of The Paperboys: Tom Landa on vocals, guitar and multiple instruments, original member Geoffrey Kelly on flute/whistles, Tom’s wife Kalissa Landa on fiddle/vocals, Brad Gillard on bass/banjo, drummer Sam Esecson, and saxophonist Kareem Kandi. The songs on the album draw from Landa’s journeys over the past six years, like “Back To You,” a love song for Landa’s son written while on tour, or “Mismo Latido,” that speaks to the truth that as you travel, you find out there are more things that unite us than divide us. “City of Chains” speaks to Landa’s disillusionment with his home city of Vancouver, where artists struggled for years under Harper’s government. With a new prime minister, the arts in Canada have a new lease on life, and there’s great change over the horizon. Once again, The Paperboys are poised to bring their adventurous vision of Canadian roots music to dancehalls everywhere, spreading good cheer and great music.

An absolutely outstanding band we challenge anyone not to like.

“One of the most exciting bands to come out of the folk-roots corner…the most exuberant record I’ve heard in ages…breathtaking.” fRoots

“A place where Irish, Mexican and Roots music collide.” The Seattle Weekly

Observant, outspoken, and at the top of her craft, Sarah’s new album ‘The Bloom Falls From The Rose’ is an illuminous body of work; one that shines a light on the wind-whipped highway of Scouten’s life as a gifted songwriter, scholar of roots music history, and travelling musician. With flavours of Lucinda Williams, Nanci Griffiths, Old Crow Medicine Show and a wealth of old-time and bluegrass music, Sarah Jane’s songs are faithful to a long-standing folk music tradition, but often spill over into modern themes that are outspoken and edgy, from homelessness to midwifery to tongue-in-cheek heartache songs and unabashed Canadiana.