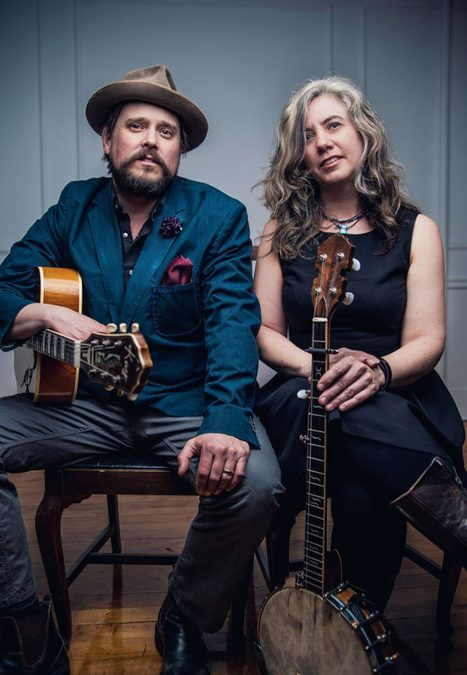 THE SMALL GLORIES: Roots duo The Small Glories are Cara Luft & JD Edwards, a musical tour-de-force partnership planted on the Canadian Prairies. With a stage banter striking a unique balance between slapstick and sermon, these veteran singer-songwriters have a way of making time disappear, rooms shrink, and audiences feel as though they are right there on the stage with the band.  On record, Luft and Edwards take the musical synergy honed from hundreds of shows together, and expand it into a new soundscape amplified by pounding drums and other textural embellishments which only reinforce the magic of their innate chemistry — a chemistry labeled the “Lennon-McCartney syndrome,” by Americana UK, writing, “Some things just work together… to witness a performance by The Small Glories is a rare opportunity to experience that indefinable quality that creates perfection.”  Luft and Edwards duplicate and reinforce each others’ many strengths and yet allow their distinct personalities to shine through, resulting in a live show that is as heartwarming as it is hilarious, as finger-picking proficient as it is relatable, and as Canadian as, well… it’s very Canadian. But that hasn’t stopped ‘em from winning over audiences from Nashville to the Australian Outback. Their highly anticipated sophomore album “Assiniboine & The Red” was released on June 28, 2019 on Compass/ Red House records.

AMERICAN SONGWRITER
“ … when two voices meant to merge find each other, their power somehow multiplies… The Small Glories generate so much energy together they could almost form a hurricane… though blizzard might be a more apt metaphor for this Canadian duo.”

PASTE MAGAZINE
“Luft and Edwards sound right at home together, and they may soon join duos like Mandolin Orange and Shovels & Rope among the ranks of Americana prestige.”

NO DEPRESSION
“Perhaps The Small Glories need to rename themselves, for the full-hearted lyrics, the swelling harmonies, and the gorgeous fabric of the songs on this album are certainly large and wash over us with a powerful beauty that pulls at our hearts.”

NPR MUSIC
“The Small Glories’ perform winsome, bluegrass-inflected folk-pop music that’s only deepened by their loose and lighthearted onstage chemistry. The pair’s concerts often double as comedy shows, wherein byzantine song intros somehow magnify the escapism of the buoyant songwriting. But the music itself is no joke: Luft is a Wailin’ Jennys alumna whose work on the clawhammer banjo is to die for, while Edwards’ guitar and vocal harmonies deepen and enrich the duo’s sound.”

POPMATTERS
“With a sense of place the overarching connection for the material, the pair work their way through a series of gorgeous, never overwrought tunes. Whether from the plains or the prairies, the city or the countryside, one can find something that reminds them of home… and some sense of comfort in the Small Glories‘ music.”

BLUEGRASS TODAY
“Luft and Edwards mine a sound drawn directly from a distinct rootsy regimen. With their close knit harmonies and an archival folk-like feel, their music taps into tradition while maintaining its contemporary credence. Now, two albums on, they’ve become a force worth reckoning with, seasoned and spirited all at the same time.”

FRONT PORCH MUSIC
“Luft and Edwards compliment one another so perfectly and blend to create a beautiful piece of art… These two could sing the alphabet and turn it into a masterpiece!”

GLIDE MAGAZINE
“… ‘Sing’ is a profound soon-to-be anthem of our times, that combines pick-and-holler melodies and directness. Like Patty Griffin and Gillian Welch, The Small Glories bring a sweet idealism and emotive vocals that stick both to the ears and soul.”