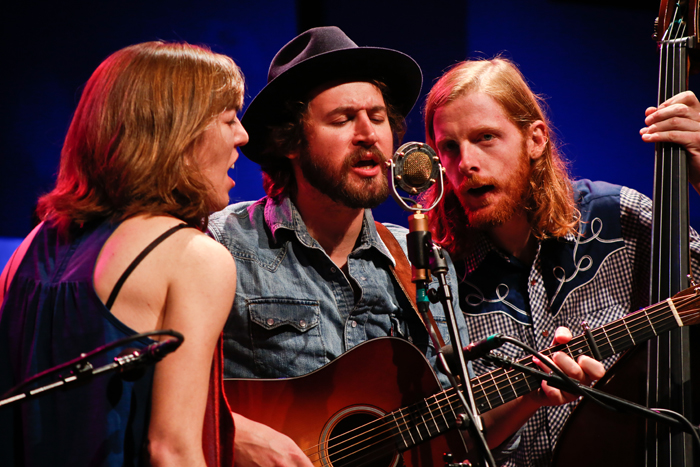 PLEASE NOTE: This event will be taking place at our alternative home for the evening: BUSH HALL, 310 Uxbridge Road, London W12 7LJ

THE STRAY BIRDS: Their full-length debut, ‘THE STRAY BIRDS’ was named one of the Top 10 Americana/Folk Releases of 2012 by America’s all-important National Public Radio, but it was their outstanding follow-up, ‘BEST MEDICINE’, that finally established the band as a major force on both sides of the Atlantic.

A full-house show at Celtic Connections Festival and triumphant appearances at events such as MerleFest and Cambridge Folk Festival in the same year, elevated them to a level that had been predicted by legendary BBC presenter Bob Harris who told listeners to his radio show: “When the next full-length album comes out, we’ll see them elevated into a kind of folk/bluegrass superstardom.”

‘Live’ they are a potent, mesmerising force, and it is those performances that have earned them must-see status, long after influential figures on the US circuit began to mark them as “ones to watch”.

That new album will be delivered in 2016 ahead of this UK tour – now as a four-piece – having added the hugely talented percussionist Shane Leonard to the line-up.

At Cambridge Folk Festival where they were declared one of the most outstanding acts, Sky Arts filmed them as part of their coverage and BBC Radio 2 folk presenter Mark Radcliffe, introducing them, said to camera: “I know you are gonna love them!”

With just two old guitars, an upright Bass and a bucket full of rich, aching harmony, there’s a hint of Hank a twist of Waylon, and a sprinkling of Gram, it’s up and down soft and loud and swings like that big ol’ country snake….

“The Goat Ropers are the real deal ! I was blown away when I first saw them play and heard them harmonise, I wanted desperately to join in. If there’s any justice in this crazy world, they’ll soon be a household name and we’ll all be keeping it country with them” (Romeo Stodart- The Magic Numbers)

“The Goat Roper Rodeo Band take a slightly psychedelic route to the finish line and include some serious footstompin’ rock ‘n’ roll along the way, Mix in a little gospel fire and a sprinkle of Gram and these boys ruled our last afternoon” (Spiral Earth)

“With refreshing, startling vocal harmonies and quirky song writing skills, these young’uns can roll out a fab sombre number just as well as an upbeat one, the Goat Roper Rodeo Band possess a uniqueness and quality that promises success and lovers of this old timey sound are simply going to love this.” (Maverick magazine)

“Man, how can some so young be so sad….and so perfect!” (Ian Dunlop – Gram Parsons / Flying Burrito Bros).