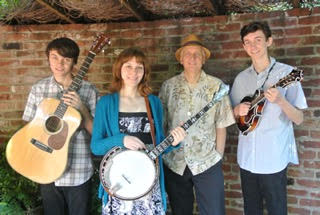 “The next generation of bluegrass is here: The Tuttles! This young, super talented band is composed of singers
and multi-instrumentalists who have been playing music since they were barely old enough to hold a pick.” – Freight & Salvage Coffeehouse, Berkeley

The Tuttles are based in the heart of Silicon Valley, yet are steeped in traditional bluegrass music. They have performed to standing ovations across the U.S. and into Canada and have over two million views on their YouTube music videos from fans around the world. The band is especially known for astonishing musicianship, beautiful singing and gifted songwriting.

“At Gettysburg they received 3 standing ovations and were introduced for their second set as the surprise discovery of the festival. Their instrumental wizardry almost made me laugh out loud in sheer amazement.” – Bluegrass Music Association of Canada, Dave Porter, V.P.

“Molly Tuttle blew away the unsuspecting crowd with her rapid fire bluegrass guitar work that would put even the most talented shredders to shame. It was a marvel to see such incredible technical skill combined with a sweet voice and fun, barn-storming songwriting. She reminded me a bit of Nickel Creek, i if all three members were transformed into a single bluegrass superhero.” – Write to the Beat, review of Milk Carton Kids & Molly Tuttle concert