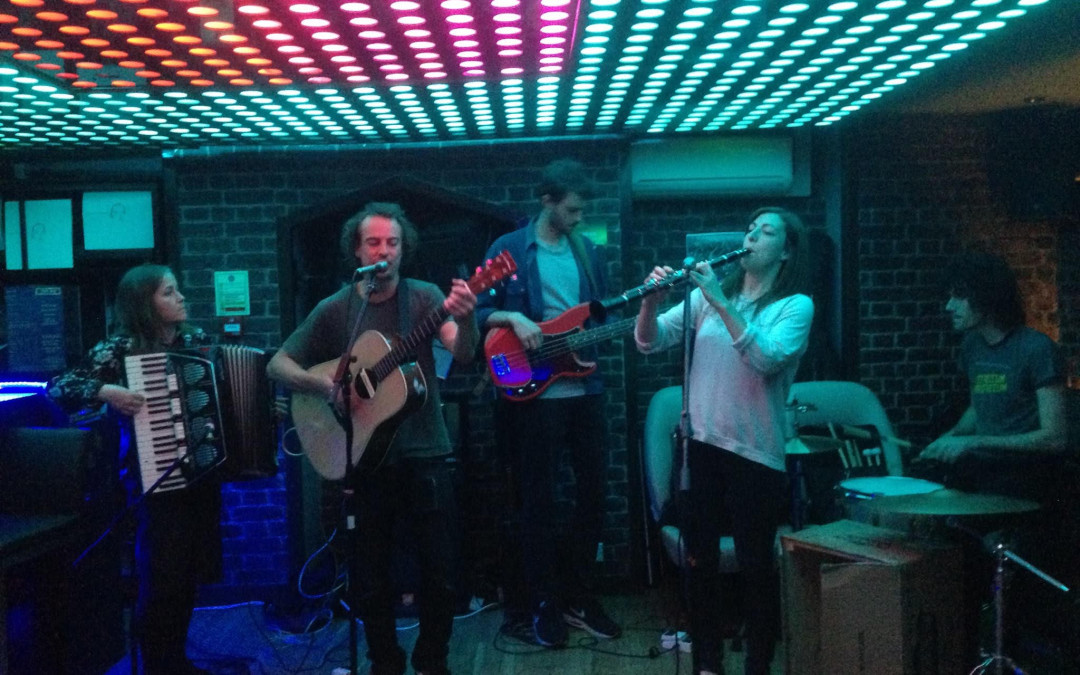 “They practice a dark stem of alternative folk which is energetic and mysterious. It’s uplifting and real. Great lyrics, surreal images, dark and unique sounds.” – The Lantern Society

“An enigmatic, folky, funky, hook laden five piece that rattle the same hallucinatory cages as the Beta Band at their oddest, with elements of Syd’s Pink Floyd in the mix.” – The Gladstone
Formed by singer-song writer Danthedan, THE YES MESS will smother you with fanciful incantations that will let your inner animal out.

Joyful and damaged, the vocal combinations live to tell the tale, harmonising and winning.

The solid guitar rhythm will welcome you on a journey through the streets of, ‘Illness and Danger’, the ‘Land of the Laughing’ and the afterlife of a ‘Caterpillar’. The snarl and passion, groove and nagging pop melody, will boot-through as the drums roll out the swings and blows, supported by tight, peachy bass beats, and lead guitar experimentations; cheeky, creepy and bewailing.

In addition to their celebrated 3rd album, ‘Let’s Break Maths’ (2014), they dedicated their time recently to recording a series of brand-spanking new tracks at Rak Studios, inspired by holiday dreams, lyrical life mantras and madcap nights out.
PETER LEVICS:
“I don’t think I ever realized how potent of a combination the two instruments were together until I listened to August by Peter Levics.” – Matt Jensen from The Even Grounds
Peter Levics is violin and guitar duet of brothers Maris and Juris Peterlevics from Latvia, now living in London (UK). As classical music education was strong part of their childhood, they were involved in all kinds of musical activities and projects since very young age. And this is the latest one, they have got themselves into. Combining classical and folk elements with alternative/indie approach duo gets their specific mood through compositionally minimalistic expositions with overflowing catchy violin lines.
Peter Levics debut EP “Proletariat sonatas” was released in 2012, from which Proletariat sonata Nr. 3 have been included in compilation LP Odyssey of Rapture vol 2 released by Mythical records (USA) in 2014.
In the fall of last year german label Unperceived records released Peter Levics compilation album “12 months suites cycle Pt.I”, which contains three EP named by autumn months. ”12 Months Suites” by Peter Levics could most accurately be described as musical diary, in which musicians assemble their inspiration and emotion throughout the year.
“Each month in the cycle has a slightly different feel and each has its own charms at times bearing favorable comparison to Dirty Three (quite a compliment).”
(Stationary Travels – 2015 in review: Memorable Journeys in Acoustic, Folk, &Pop)