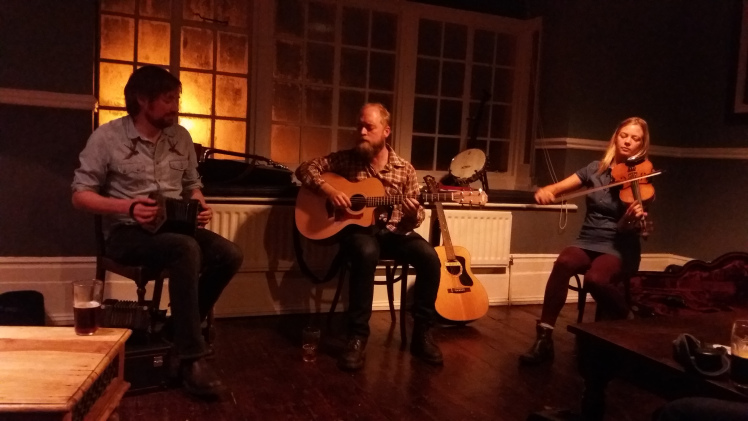 Tim Jones is one of the most distinctive voices on the London folk scene. Able to alternate between mass singalongs and powerful stripped back ballads, his song writing and delivery of traditional material has been likened to that of Peter Bellamy, Nic Jones and Fairport Convention. He is regularly joined by Ted Kemp (Laura Smyth and Ted Kemp) on concertina and Karen Phillips on fiddle, and the band also run a popular English tunes session in Dalston. Two songs written by Tim featured in the Islington Folk Club TRAD2MAD 2015 final shortlist, and his song St. Giles Bowl has also been performed several times by the Morris Folk Choir.

“The Oyster Girl is like a distillation of perfect summer evenings, full of tall tales, friendships and a few drinks. For great storytelling with real heart, catchy songs and all-round love of life, it’s hard to beat. A must-see band at this summer’s festivals, for sure.” – Bright Young Folk

Three Dollar Shoe have been together now since 2012 – a handsome trio in the form of Adam Mace, Adrian Lever and Jerry Bloom on mandolin/banjo, guitar and fiddle. They have graced the sessions and folk clubs of London with their dexterous playing and uplifting presence and ventured beyond into festivals and theatres with an array of tunes from around the Isles and across the Atlantic. In summer of 2014, they were joined by Irish singer Ruth Corey, a native of County Tyrone. A vivacious and soulful voice, Ruth has applied her vocal chords to many a genre but her heart belongs to the songs passed down to her.