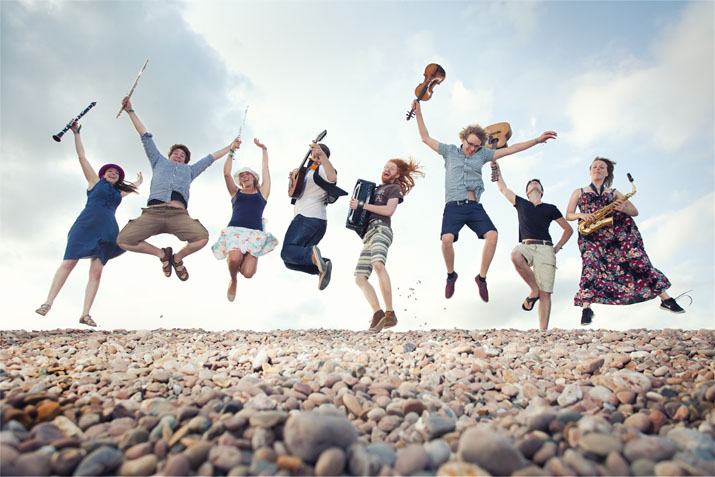 Hampshire-based Threepenny Bit are an example of how traditional dance tunes and contemporary sounds can be blended into a fresh interpretation of folk music. This dynamic eight-piece band combines a group of diehard folkies with some of the finest young jazz and classical musicians of the south. They play bold arrangements of traditional and original tunes with infectious stage energy for concerts and ceilidh dancing.

2014 saw Threepenny Bit take their sound another step further with the release of their third album, Pantomime Cannon. The composition and recording of this album was approached in a completely different way, in an effort to capture the energy of their live shows. Previous albums had seen each instrument recorded in isolation, but a move to The Ranch Production House with its cavernous live room allowed the band to play their new arrangements as one. The album was released in September 2014 to universal critical acclaim and widespread radio play. Their prominence on the festival circuit has also increased with 2015 seeing the band perform at Shrewsbury Folk Festival, Cambridge Folk Festival, Ely Folk Festival, Wimborne Minster Folk Festival and the London Folk Festival as well as returning to Sidmouth Folk Week, Purbeck Valley Folk Festival, Folk on the Quay, Rochester Sweeps Festival and Folk Weekend Oxford.