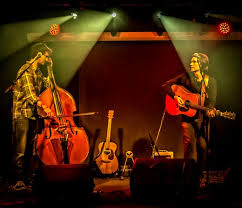 Blessed with a wonderfully emotive voice and a talent for sublime songwriting that ranges from the intimate to the epic, Tobias Ben Jacob played in ‘The Roots Union’ alongside Phillip Henry & Hannah Martin (winners of Best Duo at the BBC Folk Awards. Some career highlights to date have included a session for BBC’s ‘Late Junction’ on Radio 3, sharing the stage with Fleet Foxes J.Tillman, and appearances at Glastonbury, Green Man, Secret Garden Party, Larmer Tree and Electric Picnic. Bass player Lukas Drinkwater is one third of festival favourites 3 Daft Monkeys and is in heavy demand as a session musician having performed and recorded with a catalogue of acclaimed artists. Rock’n’Reel magazine describe their sound together as ‘inventive and thrilling’, R2 magazine have recently included them on their covermount cd, and the duo have been featured on Tom Robinson’s 6Music show.

The Little Unsaid was forged in the badlands of West Yorkshire by multi-instrumentalist, producer and writer John Elliott. Combining string and brass orchestration with beats, electronics, found sounds, Elliot completes the picture with haunting, androgynous vocals. The Little Unsaid live show consists of a live band with string section- highlights have included touring the UK with American singer-songwriter Catherine Feeny, supports with Rozi Plain, This is the Kit and Rue Royale, and performances at Glastonbury, The Secret Garden Party and Larmer Tree. His new album Fisher King was released in summer 2015, mixed by Graeme Stewart, producer of Jonny Greenwood’s soundtracks There Will Be Blood, The Master and Inherent Vice. His last London show was a sell-out at the 250 caoacity Lexington, so qwe’re delighted to welcome him to the intimate Green Note stage! He will be performing as a duo with cello accompaniment tonight.