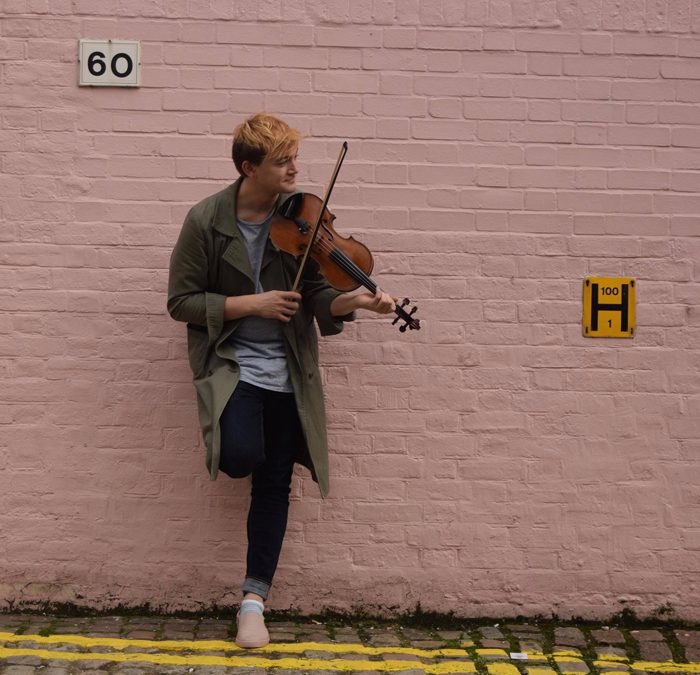 Tobie Medland Ensemble: The quartet is led by up and coming young Violinist and Composer, Tobie Medland. By fusing elements of Contemporary Classical and Modern Jazz with virtuosic group improvisation they are pushing the boundaries of Gypsy Jazz, allowing the genre to reflect the stylistic developments of American Jazz.
Alongside a formal training in the Violin, Tobie studied Composition at the Royal College Of Music Junior Department and then the University Of Leeds. Now, at the age of 24, Tobie has played across the UK as well as toured Eastern Europe and featured on numerous recordings, including Lou Clarke and The All Scars Band’s “Greatest Hits,” album, the BBC’s “Waking the Dead” OST and his own Debut EP “Pavement Jazz.” Tobie is cofounder of the Skylark Trio. Having had residencies at various London venues the trio is at the forefront of the new wave of young Gypsy Jazz musicians in the U.K.

Filippo Dall’Asta + Antonio Marzinotto: Filippo Dall’Asta is an Italian Gypsy jazz guitarist, composer, bandleader and arranger, mixing the sounds of Gypsy jazz with traditional Indian music, to forge his own style of progressive guitar playing. Filippo began playing at the age of 5 in Parma, Italy, and studied music in his native country as well as Germany, France, Holland and India. In 2010, at the age of 23, he arrived in the UK. He has toured and recorded with hundreds of world famous artists such as Lollo Meier, Mozes Rosenberg, John Wheatcroft, Gypsy Dynamite, Harp Bazaar, Tara Minton (Björk), Mehboob Nadeem, The Onironauts and many more. His touring resume covers Germany, India, Italy, France, Spain, England, Malta and Russia, with notable appearances at The Royal Albert Hall, the Houses of Parliament, the Tower of London, the Union Chapel, and many festivals in France and Italy.

For many years Antonio Marzinotto has been hosting one of the most respected jam sessions in London, at Nomad Jazz Club, playing with some of the best artists of the international scene. During those years he has had the opportunity to play in numerous events – such as the London Guitar Festival in 2007 with Henrick Jensen – and to perform at Jazz Clubs across England and Europe, sharing the stage and recording with great musicians like U.T. Ghandi, Gianni Cazzola, Giovanni Maier, Marc Abrams, Roberto Manzin, Kevin Glasgow, John Altman, Riccardo Fioravanti, Jim Mullen, Davide Giovannini, Ross Stanley, Enzo Zirilli, Davide Mantovani , Rachel Gould, Roberto Gatto to name but a few. Since coming to London, Antonio has participated in many recording sessions. He has been teaching Jazz guitar 1, 2 and 3 at the City Lit College of London for 9 years.

Tonight Antonio and Filippo will share the stage for the first time, for a new eclectic and exciting musical collaboration!