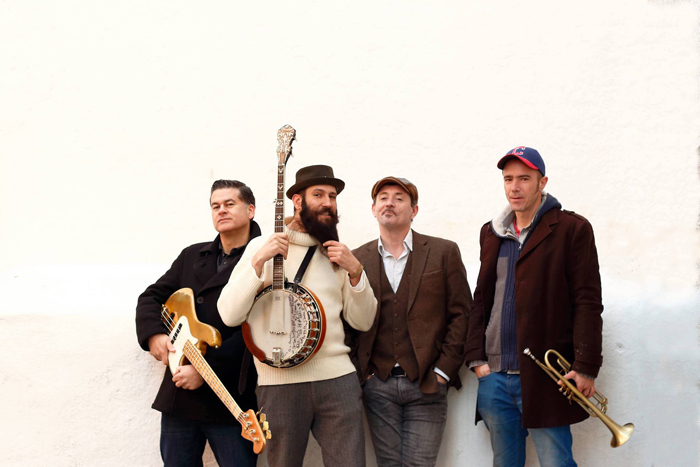 TRACK DOGS: Sun-shiny songs thriving on dark themes behind irresistible rhythms. Track Dogs are a four piece based in Madrid but hail from Ireland, the US and UK. Made up of two Irishmen, an Englishman and an American the band came together in 2011 to create their unique brand of acoustic music -a veritable 4 x 4 of voices and instruments identified by the fusion of styles which include folk, Latino, Americana, bluegrass and, dare we say it…pop. Four-part harmonies that steal the show.

Track Dogs have been barnstorming the UK with some major festival appearances and collaborations. It has been a pivotal year including playing to a heaving, rocking Trafalgar Square and surprise on-stage participation of Show of Hands’ Steve Knightley and Seth Lakeman at Shrewsbury Folk Festival. Well-established in Spain where they are based, they are surprising UK music lovers with “Sun-shiny songs thriving on dark themes behind irresistible rhythms.”

The four international “madrileños” (Garrett Wall, Dave Mooney, Howard Brown & Robbie K. Jones) whose artistic name derives from the dark subterranean world of New York’s subway system, present Fire On The Rails, a kicking album that grows on the work that has opened so many doors for the band. If they are still new to you, check out previous releases Kansas City Out Groove and Uke Songs By Track Dogs and see why they are so hard to pigeonhole.