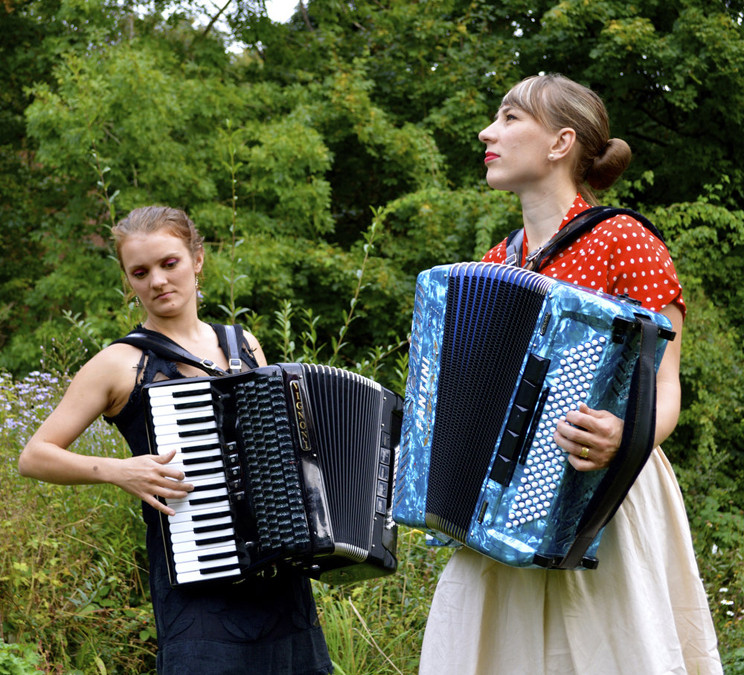 There’s a refreshingly joyful musical relationship at the heart of the new album Chatterbox, by Hannah James (accordion, voice, clogging) & Tuulikki Bartosik (free bass accordion, voice, metallophone). Two women known in their respective countries for resisting the confines of musical tradition, they’ve created a piece of work which is bold, exciting and completely original. Showcasing the accordion’s versatility through assured musical interplay, improvisation and new compositions and marked by a genuine sense of adventure, this is not like any accordion music you’ve ever heard. Overwhelmed by the reaction, they thought it was high-time they toured this fabulous music in the UK.

Hannah and Tuulikki first met in 2011 at a festival in Estonia, where they were immediately struck by their musical affinity. Determined that they would one day work together, the opportunity finally came when they were booked as a duo at the Gower Folk Festival. “Playing with Tuulikki makes me feel very free as a musician,” Hannah explains. “Our styles and skills seem to complement each other, and spark some very interesting – and slightly wacky – ideas!”

Estonian accordionist Tuulikki Bartosik is a candid and open minded musician and composer who melds the traditions of Estonia with Scandinavian old instrumental tradition and was first in Estonia to adapt traditional music to the free-bass accordion.

Tuulikkis’ classical and theoretical studies, with a masters’ degree in traditional music from Sibelius Academy in Helsinki, have ignited her curiosity to learn what traditional music could be in todays urban settings and changing world.

‘Hannah is an incredible musician – a beautiful singer, inventive accordionist and her dancing is out of this world.’ Jon Boden

Most professional musicians spend their early lives squirrelled away in bedrooms, practising scales and honing their stagecraft until a lucky breakthrough. But a happy combination of prowess, passion and precociousness has seen Hannah James grow and evolve very much in the public eye, as she begins a new chapter as a solo performer.