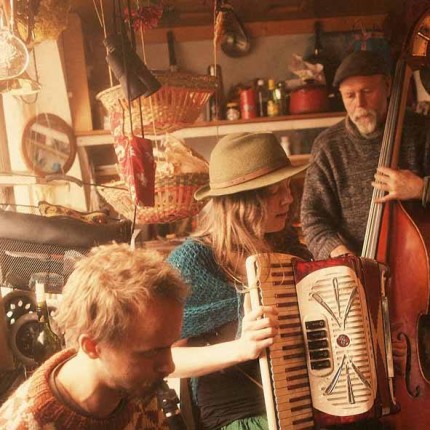 WHISKEY MOON FACE are an alternative folk group based around double bass, accordian, clarinet and banjo, led by the stunning vocals and hallucinatory lyrics of singer Louisa Jones. They combine elements of Eastern European traditional music, old-time New Orleans jazz, the baroque folk of Sufjan Stevens and Beirut, and their own unique take on contemporary folk to make for a superbly realized and truly beautiful sound.
Combining banjo, percussion, trumpet and double bass, BOUCHE are a product of the same London roots scene as Whiskey Moon Face and Brooke Sharkey. This wonderfully talented band blend the spirits of blues queens Billie Holiday and Bessie Smith and the cinematic smokey folk and jazz noir of Tom Waits, wrap it all in a cloak of finely crafted contemporary songwriting, and deliver it with charismatic panache from singer Rebekah Bouche.

SAMANTHA WHATES is a London based singer and songwriter. Despite living in the capital since her mid-teens, her heart, voice and songs retain a strong affinity with her Scottish roots, cultivating a sound that is at once thoroughly contemporary, rooted in tradition and uniquely her own. Recent performances include sharing the bill with Olivia Chaney Kings Place in May, and the Purcell Rooms in the Royal Festival Hall with Josienne Clarke and Ben Walker. She recently released her debut album Dark Nights Make For Brighter Days, which has enjoyed both critical acclaim and extensive radio play on BBC 6 Music, KCRW and Resonance FM.