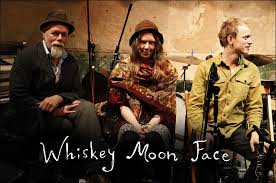 To describe WHISKEY MOON FACE as an alternative folk group doesn’t even begin to do justice to the breadth of influence, inspiration and style in their music. Based around double bass, accordian, and clarinet, they’re led by the stunning vocals and hallucinatory lyrics of singer Louisa Jones. Both ear-to-ear grinningly entertaining and profoundly moving, they combine elements of Eastern European traditional & klezmer music, old-time New Orleans jazz and the baroque folk styles of Sufjan Stevens and Beirut with their own unique take on contemporary folk to make for a superbly realized, truly beautiful, and utterly original sound- there is simply no-one in the UK making music like them.

A leading figure in the vibrant East London alt-folk scene, THEO BARD is a skilled lyricist and multi-instrumentalist (guitar, violin, bass), with a deft ear for melody. His songs are delivered in a direct and frank narrative style that mark him out as an exceptional songwriter, borne of a lifetime steeped in music and song- he played violin from the age of four, and honed his craft busking in London’s busy markets.

“….on the cusp of very good things” – The Guardian