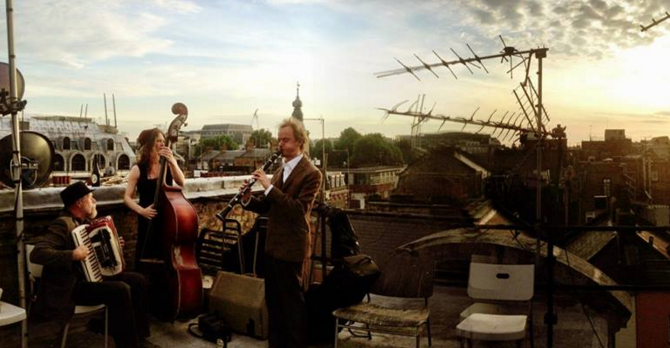 To describe WHISKEY MOONFACE as an alternative folk group doesn’t even begin to do justice to the breadth of inspiration and style in their music. Based around double bass, accordian, and clarinet, they’re led by the superb vocals and hallucinatory lyrics of singer Louisa Jones. Capable of being both ear-to-ear-grinningly entertaining and profoundly moving, they combine elements of Eastern European traditional & klezmer music, old-time New Orleans jazz and the baroque/ chamber folk styles of Sufjan Stevens and Beirut with their own unique take on contemporary folk music to make for a superbly realised, truly beautiful, and utterly original sound. There is simply no-one in the UK making music like Whiskey Moonface.

58° NORTH is the latitudinal line that links the home places of the three musicians that make up this exciting new folk act; Ewan MacDonald, Alastair Caplin, and Lewis Murray, with a combination of fiddles and mandolin. Between the three of them they have played on some of the UK’s most prestigious stages, including The Royal Albert Hall, Westminster Abbey, The Barbican and The Roundhouse, and played with some of the UK’s finest folk musicians- Alasdair Roberts, The Incredible String Band, Emily Portman, Abigail Washburn, and The Ceilidh Liberation Front..
After many evenings spent learning each other’s playing and tunes, the band have melded a sound that bonds together the ancient tradition of Scottish Traditional music with folk music from other European and Scandinavian traditions. The music ranges from the most intimate stringed slow airs to fiery table-thumping sets of reels.