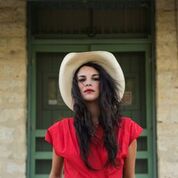 The past two years have been massive for WHITNEY ROSE, who is rapidly becoming an international sensation. The vintage country pop specialist’s sophomore offering, Heartbreaker of the Year, converted critics’ double takes into palpable buzz with its beguiling blend of then and now.

Her 2015 release Heartbreaker of the Year was produced by The Mavericks’ Raul Malo, who also performs on multiple tracks. Rose’s vocals convey both vulnerability and sharpness – a contrast that permeates her music as a whole – to enthralling results. The album’s success has impelled those in the know to include Rose’s name in any conversation about the future faces of Americana and Country music.

“Whitney Rose has been lighting up the touring venues ever since her breakout album, Heartbreaker of the Year, and standout performance at last year’s AMA. She’s been praised everywhere from ND to The New York Times. And like any serious heartbreaker, she’s got a killer band” – No Depression

South Texas Suite is a meticulous study of sound and place, but also a product of unexpected circumstance. Last October, shortly after the release of her album Heartbreaker of the Year, Rose packed up her boot collection and headed south to play a two-month residency at Austin’s famed Americana bastion, the Continental Club. But that November-December engagement went so well, she wound up staying. Since then, she’s toured extensively throughout North America, made her European debut and signed with Thirty Tigers-distributed Six Shooter Records.

South Texas Suite will be released on January 27th 2017 and will be supported by a month long North American tour, and following that, over two months of performances in Europe, Scandinavia and the UK.
“ A sultry country classicist with a tremble in her voice, Whitney Rose is partial to the magisterial gestures of the 1950s and 1960s.” – New York Times

“Playfully croons through tales of love and mischief with girlish breath and devilish twang.” – Rolling Stone

“Rose nailed this concoction of joining the purer sides of pop and country. The most exciting part is seeing where she goes next.” – American Songwriter

“Whitney Rose’s voice sounds like it’s comin’ on out of a time machine in RCA’s Studio B in Nashville circa 1960. Her songwriting blends vintage R&B and retro country.” — Magnet

“Sultry, dynamic, spicy in the way it slides between styles yet continues forward cohesively, Heartbreaker of the Year is quite the exhibition of Whitney’s talents.” – Saving Country Music

“Her writing is first rate, and she is really fucking good at her instrument.” — PopMatters