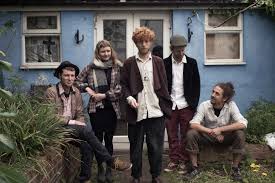 Rising stars in the alt-folk world, YOUNG WATERS’ twisted neo-folk is a tapestry of emotionally powerful vocals, stirring harmonies, lyrical strings and finely mastered acoustic guitar. Their exhilarating rhythms and intricate melodies, coupled with a repertoire that combines startling original material with unique arrangements of traditional folk songs, makes for a captivating stage presence. Their 2016 live album, ‘Live from The Fayre’ was recorded at Rollright Fayre, and has been followed by a host of festival appearances, including Glastonbury, Secret Garden Party, Wilderness, and Boomtown.

BIRD IN THE BELLY are a hugely exciting, recently formed, new-folk collective, consisting of alt-folk artist Jinnwoo, trad folk duo Hickory Signals, instrumentalist and producer Tom Pryor, and musician and visual artist Epha Roe. They have spent the last year collecting and recording little known and rarely recorded traditional folk songs, which they have put together to form their debut record together ‘The Crowing’, recently released through Proper/GF*M Records.

‘Stark and raw, they boldly go where few artists dare to tread’ Louder Than War