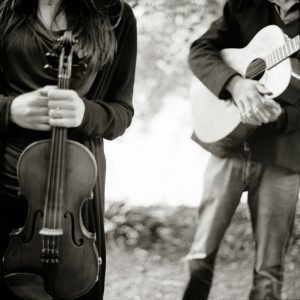 ZOE CONWAY & JOHN MCINTYRE: With an exciting blend of eclectic fiddle and guitar music, Zoë Conway and John Mc Intyre bring to the stage sympathetic arrangements of traditional Irish music, compositions and songs, old and new.  The husband and wife folk duo possesses a rare facility to draw pieces into their repertoire from other genres such as classical, jazz and world music and express this material in way which not only displays the sheer range and knowledge of both instrumentalists but also exhibits the wonderful versatility of their instruments.

The recent release of their critically acclaimed album entitled Go Mairir I Bhfad_Long Life To You has brought international attention to the duo, and so they are increasingly in demand in Ireland and abroad.  For this unique album, twelve leading Irish composers were commissioned to each create a piece specifically for Zoë and John, for fiddle and guitar.  Liz Carroll, Máirtín O’Connor, Steve Cooney, Frankie Gavin, Andy Irvine, Charlie Lennon, Donal Lunny, Tommy Peoples, Peadar O Riada, Mícheál Ó Súilleabháin, Niall Vallely and Bill Whelan were all involved in this exciting project.  The album received a glorious five stars from national paper, The Irish Times. (see review below)

Zoë, no stranger to the stage, has performed with an impressive list of international artists including Riverdance, Damien Rice, Lou Reed, Nick Cave, Rodrigo y Gabriella to mention but a few.  In contrast to this, she has been an important figure within classical music circles in Ireland and abroad, as her crossover discipline has allowed her the pleasure of appearing as soloist with acclaimed orchestras such as The Irish Chamber Orchestra, National Symphony Orchestra, BBC Symphony Orchestra and German WDR Symphony Orchestra; pieces recited include her own compositions and works composed for her by world renowned Irish composer, Bill Whelan.

John began his career as electric guitarist with Irish indie band, The Revs. Through this he has also known the privilege of performing on many famous stages and festivals including Oxygen, Wittness and Slane in Ireland, Reading and Leeds in the UK, Rockpalast and Haldern in Germany, and SXSW in America.  He has worked alongside many world renowned producers, and is now producing and recording in rock and roll, traditional and classical genres.  In his studio work, the tone and feel of the performer is of paramount importance, and his recordings are acclaimed for their ‘true to life’ representations.  With a similarly diverse background in music to Zoë, John studied classical guitar for many years, and from early childhood, he was immersed in the traditional music of south west Donegal.

Together, Zoë Conway and John Mc Intyre have been described as “simply one of the best folk duos on the planet” (BBC), and audiences in Ireland and beyond keep coming back for more.  They have performed for dignitaries around the world, and this year they were invited to perform a special concert for Irish president, Michael D. Higgins in the National Concert Hall, Dublin.  For the concert, they played their own music with The National Symphony Orchestra, which was also broadcast live across the world on Lyric FM.  They were awarded ‘Best Live Show’ from popular YouTube channel, Balcony TV, and have received a combined 250,000 views online.